THIS FILM IS NOT YET RATED

I approached this documentary with some skepticism, given the hype and glowing praise a number of my friends gave when they all saw it in Provincetown in June. Well, believe the hype--this is an absorbing film that will resonate with anyone who champions independent cinema. Director Kirby Dick has made a smart, provocative and ultimately disturbing expose of the MPAA. He examines the organization from all angles, using everything from the infographics and talking heads interviews to hiring a private eye to reveal a slew of alarming discrepancies between what the censors think we should see and what the public actually wants. His investigation is balanced yet intensely personal. The result is like a Michael Moore film without the cheap shots and incessant narcissism. Don't miss it. (5 stars)
Posted by C. Kriofske at 6:59 PM No comments:

Dan Dunne (Ryan Gosling), a young, white history teacher and girls’ basketball coach in a mostly black Brooklyn middle school would seem like the ideal mentor. Eschewing the required curriculum, he genuinely inspires his students to think about and apply historical events to their own lives. Lest you think this is going to be another DANGEROUS MINDS, however, it’s not long before we find out that Dan is also a drug addict. He tries to keep these two worlds separate, but isn’t always successful—before long, one of his students, tough, stone-faced Drey (Shareeka Epps), walks in on him getting high in the girl’s locker room after a game. Drey doesn’t rat Dan out, but she does tenuously forge a friendship with him.

The film’s crafty title refers to a wrestling move that consists of an opposing, interlocked force between two players that’s nearly impossible to break out of. We easily see the metaphor in Dan’s struggle to isolate (and compromise) his professional and private lives; it also applies to Drey. With her father’s absence unexplained, her mother working double shifts as an EMT, and her older brother incarcerated for dealing drugs, she drifts between Dan and her brother’s friend Frank (Anthony Mackie). He’s a fellow dealer who reaches out to her as a father figure, but like Dan, he’s not an entirely appropriate one for her.

After writing this film’s screenplay, director Ryan Fleck and his producer/co-writer Anna Boden adapted it into an exceptional short film called GOWANUS, BROOKLYN which I saw at the Independent Film Festival of Boston in 2004. Focusing primarily on Drey rather than Dan (Epps was in it but Gosling had yet to be cast), it was refreshing to see a filmmaker taking a cue from the minimalism/realism of Jim McKay’s wonderful OUR SONG, and it left me with high hopes for a feature-length version.

Fortunately, HALF NELSON doesn’t disappoint. With his brave, intricate, award-worthy performance, Gosling proves himself the ideal match for this material and newcomer Epps is a real discovery: both are so assured, yet so natural to the point of disappearing into their roles that they each seem startlingly real and make a challenging premise plausible. Mackie is also impressive; he gives depth to what in a lesser film would be just the rote part of the charming drug dealer. Tina Holmes (best known as Maggie from SIX FEET UNDER) is also good in a small role as Dan's ex-junkie ex-girlfriend.

Fleck has noted that the screenplay was born out of a frustration with the malaise hanging over America following Bush, 9/11 and the Iraq War. It’s referenced explicitly just once and subtly numerous times (particularly in a superb late scene where Dan visits his suburban family that’s absolutely heartbreaking for being so restrained yet dead-on), but this bleak, intelligent character study is not really about placing the blame for this malaise on anyone. For Dan and Drey, possible redemption and mere survival comes down to the strength and balance a friendship can provide. That the film carefully reaches this hopeful conclusion without ever seeming bogus or lapsing into cheap sentiment is what truly inspires. (5 stars)
Posted by C. Kriofske at 7:55 PM No comments:

As promised, more pictures from my Milwaukee trip. We return on an idyllic Sunday morning devoid of the previous two days' humidity and overall grey milieu. 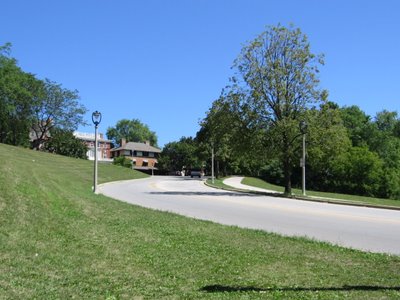 A stroll down Lafayette Hill towards the Lake, blocks away from my parents' first apartment. 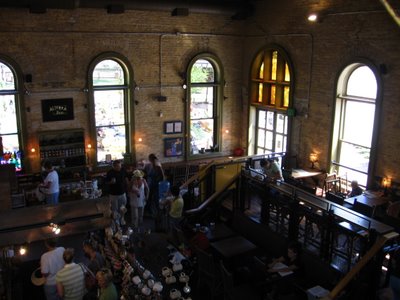 Alterra at the Lake, a coffehouse in what was once the historic Milwaukee River Flushing Station. 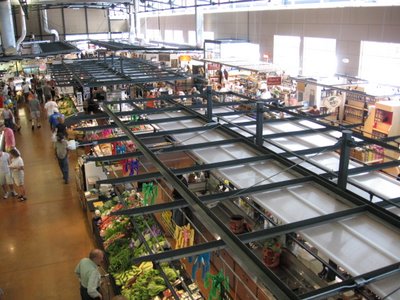 The newly opened Milwaukee Public Market: certainly the city's most striking recent addition since the Calatrava wing at the Milwaukee Art Musuem. 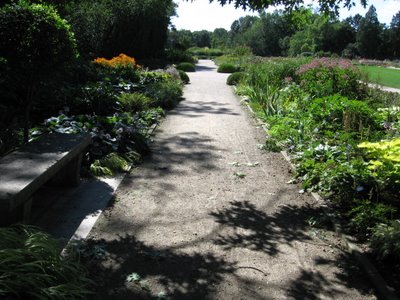 The Boerner Botannical Gardens in Hales Corners. Perhaps the most beautiful, serene place I know... 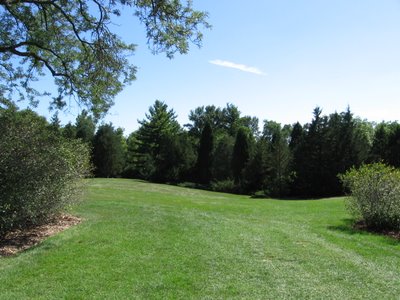 Particularly this meadow, which makes me want to run off and frolic through it for days. 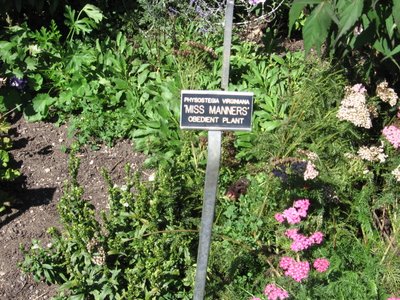 Finally: What the world needs now is submissive flora. 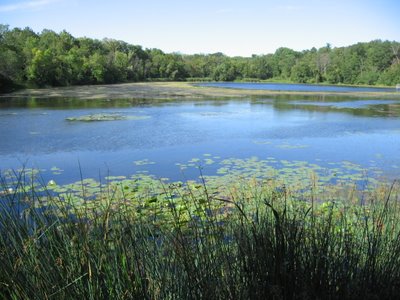 Scout Lake Park in Greendale: you can just imagine how lovely the autumn foilage is. 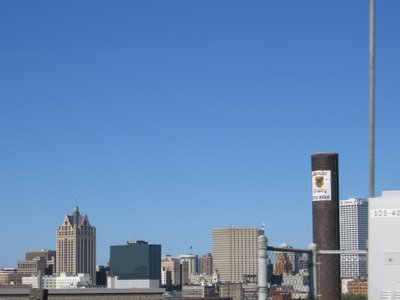 Downtown skyline from a passenger seat window on 1-94. The smokestack in the right foreground has an ad for Sprecher, the city's finest microbrew (and root beer). 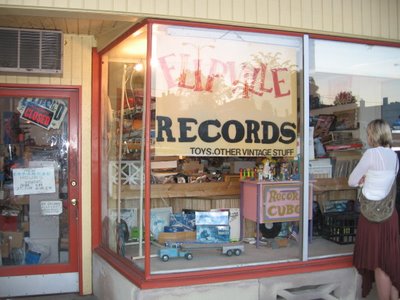 Sadly, all the super-cool vintage shops are closed on Sunday evenings. 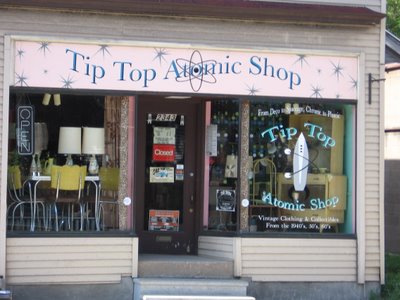 Some are permanently out-to-lunch on Mondays, too. 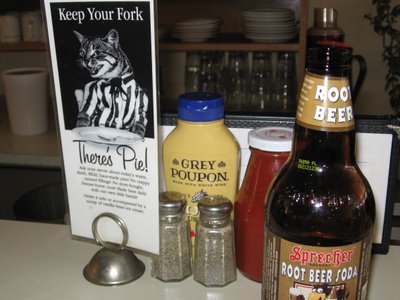 Speaking of lunch, we dutifully saved some room for homemade blueberry pie at Lulu's diner in Bay View. Not to mention some Sprecher root beer. 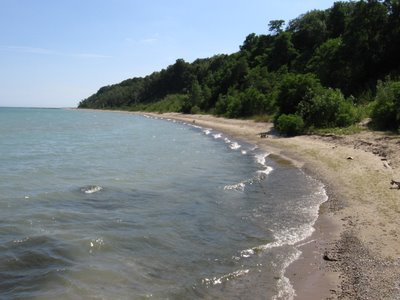 As glorious as any old ocean, in my opinion. 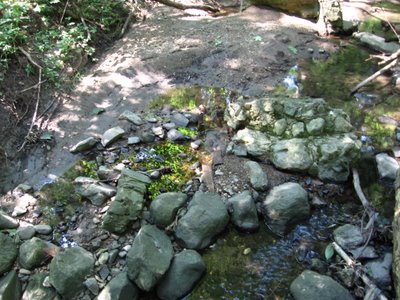 Treasure awaits those who seek it in the otherworldly ravines of Grant Park. 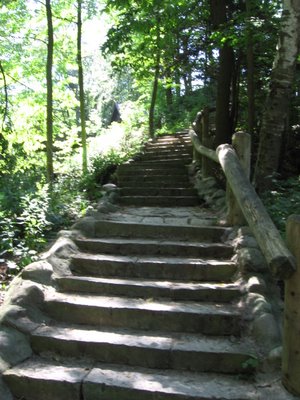 I leave the park and the city, anticipating strange, new adventures and possibilities.
Posted by C. Kriofske at 11:36 PM No comments: