We're midway through 2009, so here's a rundown of my ten favorite films and albums of the year so far, each in alphabetical order. If the film list looks a little shabby compared to past years, well, I'm looking forward to Toronto. On the other hand, I can't remember ever having such a robust album list at this point. 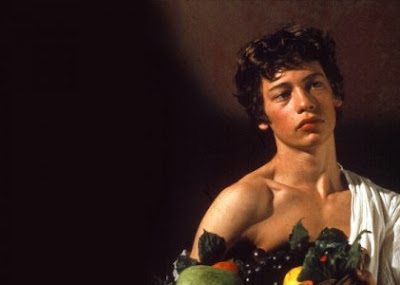 I’m willing to bet that CARAVAGGIO (1986) is Derek Jarman’s most widely seen film after EDWARD II on this side of the pond. It’s the only one to have screened theatrically in Boston in the past five years (as part of the CineMental series at the Brattle Theatre in May 2008). As a biopic of the Baroque Italian painter, the subject matter is also a tad more accessible than usual for him and easily more conventional than anything preceding it in his oeuvre—although most viewers probably wouldn’t apply the term “conventional” to a film that depicts the unveiling of the artist’s most renowned work (“Profane Love”) as a hip gallery opening, complete with appetizers, languid modern jazz and a snippy, bitchy art critic reporting on the proceedings.
Jarman’s usual idiosyncrasies aside, the film has a fairly conventional framing device: it opens with the titular painter (Nigel Terry) on his deathbed as he looks back at his life as a series of flashbacks. This gives viewers a needed in to Jarman’s highly personal depiction of this historical figure, whom he places in a sparse but not overly minimalist late 16th/early 17th century Italy (actually shot in a London studio) where a majority of its denizens speak in low-class English accents and freely make use of such anachronisms as a motorcycle or an electronic calculator.
The low-class accents are actually somewhat appropriate. A good chunk of the film explores how Caravaggio, when commissioned by the Catholic Church to create portraits of religious icons, often used thieves, prostitutes and other common folk as models. Expanding upon the homoerotic nature of a few of these portraits, Jarman constructs a love triangle between the painter and a young couple, Ranuccio (Sean Bean) and Lena (Tilda Swinton) to give the film its dramatic arc. In a key scene, as Caravaggio paints Ranuccio for the first time, the artist throws gold coins to his model, who stuffs them in his mouth as he holds his pose—the longer he does so, the more money he receives. All is silent except for the tinkling of the coins, the intensity heightened by back-and-forth cuts between the two men (and Lena, looking on in concern) until Caravaggio walks over with the coin between his teeth, which he offers to Ranuccio, whom accepts it in the form of a kiss. 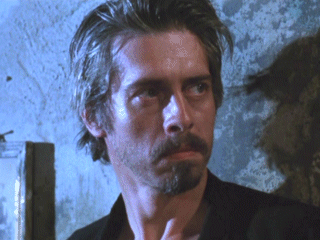 Although Terry gives the most professional, multi-faceted lead performance in any of Jarman's works up to this point, Swinton (in her film debut) more than holds her own. When introduced, she’s presented as a fairly unremarkable peasant. However, she has her moment preceding the "Profane Love" unveiling: in an elaborate, aristocratic dress, she takes off the scarf covering her hair up to that point and lets those long, red locks come flowing out. She looks in the mirror, then directly at the camera and one feels this instant serendipity between director and actor—you can tell why Jarman wanted to employ her in every subsequent film he would make. 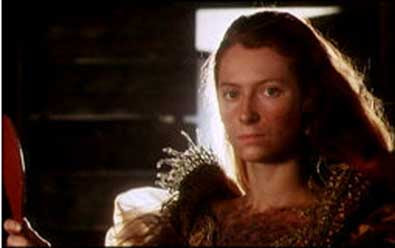 Conflict and betrayal within the love triangle eventually leads all three participants to tragic ends, but in its heart, CARAVAGGIO is less a film about politics both religious and class-related and sexual entanglement and more about painting. Jarman (and production designer Christopher Hobbs) pay great homage to their subject by incorporating his chiaroscuro technique into the look of the film. They meticulously, dramatically use light and shadow and a limited but rich color palette to conjure up live action approximations of Caravaggio’s greatest works. (Viewing both a recent film print and the 2008 DVD release were revelatory after years of knowing it only via an old, dubbed VHS copy.)
Even more interesting are moments that delve into the artistic process itself. With scene after scene of Caravaggio working with his models, it’s difficult not to think of Jarman’s early career as an artist (although he was into landscapes more than portraiture) and damn near impossible not to see them as reflexive statements of Jarman as a filmmaker. As Caravaggio used common men and women as models for religious icons, Jarman tended to employ his friends rather than professionals as actors in his films. When he did work with professionals (such as Terry or Swinton), they often came from other backgrounds such as the stage but proved unorthodox (and flexible) enough to fit into Jarman’s milieu.
Despite all of its reputable qualities, the film feels a little too hermetic for its own good, which is likely a result of its lengthy gestation: Jarman spent seven years trying to make it and, with the exception of a few scenes (like the aforementioned coin tossing), the finished product lacks spontaneity and enthusiasm. The numerous deathbed scenes sprinkled throughout also drag a bit and could use a smidgen of the vitality and purpose of the sequences of the artist at work. In the end, CARAVAGGIO is a perfectly respectable Derek Jarman film; the problem is, you sense throughout his career Jarman did not set out to make anything that was merely respectable. Thanks to Swinton’s influence and some life-changing news received months after this film’s completion, Jarman’s work would take a new, radical direction that made most of his past features seem comparatively quaint.
Posted by C. Kriofske at 10:10 AM No comments: