I have grand ideas for many potential blog posts, but procrastinator that I am, I can't seem to finish (much less start) any of 'em. So, to get this blog active again, I am going to try to post about five things that interest me every week. Some will have a paragraph written about them (or more); others may be lucky to get one sentence. I will also include photographs and links because sometimes I fear I won't have five things to write fluently about. But it will give me something to aim for. 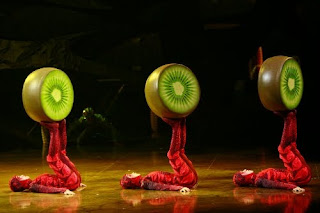 Before this weekend, my vague impression of Cirque du Soleil was that of an arty, expensive Quebecois entertainment setting up shop in town once or twice a year with one inexplicably named production (Kooza? Zumanity?) after another. Having now seen one of these shows, I can confirm I wasn’t too far off the mark. The insect-themed OVO opens with a ginormous egg in center stage, which hatches to reveal the cast, all men and women clad in elaborate, eye-popping costumes that resemble grasshoppers, red ants, a spider, a fruit fly, a ladybug, and many others I did not quite recognize. Combining graceful ballet with impressive acrobatics and accompanied by a lovely, airy score (performed live by an orchestra, some of whom appeared on stage dressed as snails), the show was equally wistful and weird. I enjoyed it immensely.

I’ve always struggled with war films (both fiction and docs)—it’s possibly my least favorite genre. But I loved THE HURT LOCKER and if this isn’t exactly its real-life equivalent, that’s fine because it attempts something else. Not to say war’s psychological effects aren’t explored (they make for some of the most intense, touching moments), but Sebastian Junger's and Tim Hetherington’s in-the-trenches-of-Afghanistan doc amazes primarily for its access in which it closely follows a platoon in combat for one year. Fortunately, the filmmakers know they’re making a film and not just a document—the narrative threads and personalities that emerge cohere and compel as well as any screenplay without feeling scripted at all.

3. Just a few (of many) things to love about the MAD MEN Season 4 premiere (spoilers ahoy!):

*Peggy’s more sophisticated (but still not overly swanky) new ‘do.
*Henry’s refreshingly no-nonsense mother (she astutely refers to Betty as a “silly woman”).
*Adorable new office underling Joey (Matt Long), whom I suspect will turn out to be more than a random addition.
*Kiernan Shipka (young brat Sally Draper) has made the opening credits at last.
*Don Draper getting slapped in the face (repeatedly) by a prostitute.

4. As I’m less than a hundred pages away from finishing The Satanic Verses (at last!), which one of these unread books on my shelf I should try next? The Portable Dorothy Parker, or Word Virus: The William S. Burroughs Reader? Leave a comment if you feel passionate about one or the other.

5. A most fetching portrait spotted at the British Brewing Company in Framingham this past weekend: 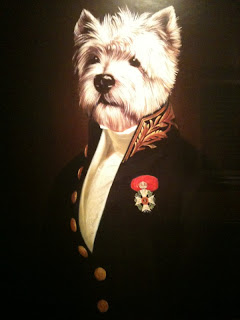 Maggie should appear so classy.
Posted by C. Kriofske at 9:18 PM No comments:

In her previous film 35 SHOTS OF RUM, Claire Denis focused on a father and daughter of African descent living in France; here, she shifts her attention to a French family who owns a coffee plantation in Africa. Whereas race and living as a minority in an adopted homeland provided only a subtext in the earlier film, it's at the dead center of this one. Maria (Isabelle Huppert), who entered this business (and continent) via marriage, manages the plantation. When the French military exits the region due to war among local tribes, she disregards their warnings to follow, determined to hold on to this life she's so invested in. Initially, her steadfastness appears admirable and brave, but as blatant hostility towards the family escalates, her actions merely seem stubborn and not without hubris (although Huppert lends her some much-needed empathy).

While Denis rarely makes the same film twice, WHITE MATERIAL feels like a different beast for the director. For all of its expected touches (another evocative Tindersticks score, the casting of Michael Subor in a small but pivotal role), it also throws in a few curveballs such as a cinematographer other than Denis regular Agnes Godard (Yves Cape, whose hand-held work is in stark contrast from Godard's poetic, gorgeous imagery) and a far more pronounced, straightforward narrative structure. I applaud Denis for leaving her comfort zone a little, and an unnerving scene where a child army slowly emerges from the dark woods is as mesmerizing as anything in her oeuvre--but I'd rather she kept the story more ambiguous, more mysterious. Apart from one shocking moment, we suspect what kind of finale the film is hurtling towards too far in advance.
Posted by C. Kriofske at 10:34 PM No comments: