Until I get back into writing on a regular basis (oh yes, that day is upon us), some photos from the past month, all of 'em taken with my iPhone. For a camera, it's not a bad phone, but I do look forward to breaking out the ol' Canon as Spring comes into focus. 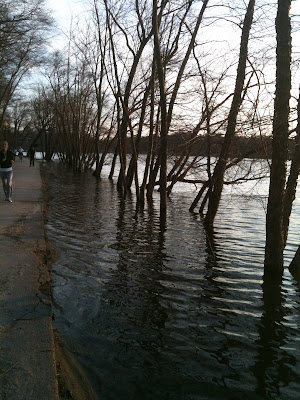 I don't think I've ever seen Jamaica Pond this full; usually the water doesn't even come up to those trees. 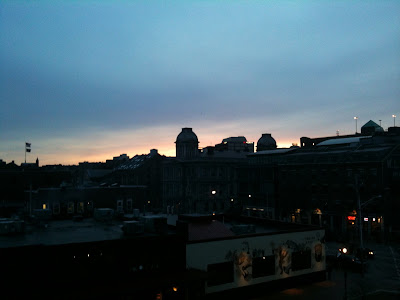 On a parking garage roof, overlooking Commercial Street in Downtown Portland, ME at dusk. 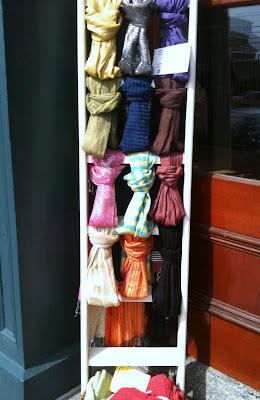 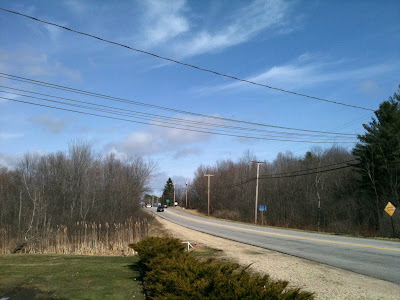 US Route 1 North of Kittery, ME. 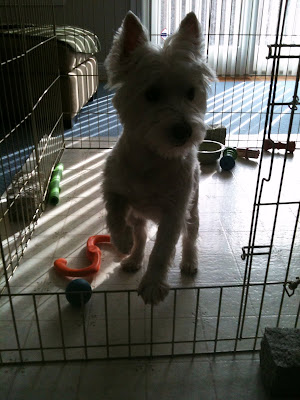 Maggie at 18 months, still as cute as the dickens.
Posted by C. Kriofske at 10:33 PM No comments: 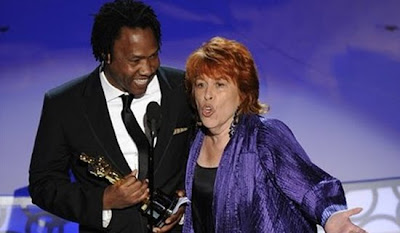 Most ghetto acceptance speech... ever!

Here's the transcript of my blogging last week's Academy Awards, in an easily digestible one-post format. Sandra Bullock aside, history will remember this year's slate of winners as unusually daring (I can't remember the last time one of my own five favorite films of the year won Best Picture); however, these comments paint a more accurate picture of how innovative the telecast was, which is to say, not very...

8:40 PM: "Gabourey and I both have something in common - in our first movies, we were both born a poor black child". Ah, Steve Martin, you make up for the Neil Patrick Harris opener (talented guy, but enough already with the award show shtick), the weird "82" logo (looks like it comes from '72) and the inexplicable appearance of a shot from Turner and Hooch. Loved Alec Baldwin's "cultured" accent (during the Avatar animation and introducing "young Zac Efron") as well.

8:54 PM: The first award of the night, Best Supporting Actor, predictably goes to front-runner Christoph Waltz for Inglorious Basterds. Well, it was a tremendous performance, and only Woody Harrelson probably deserved it as much.

That clip of The Lovely Bones actually makes me feel a little embarrassed for Stanley Tucci (who still wouldn't have won against Waltz if he had been nominated for his lovely work in Julie and Julia instead).

Gee, think these lengthy, multiple film clips for each of the nominees will last as the Midnight hour approaches?

No performances for Best Song in a Motion Picture on stage this year! And no complaints from me... Jesus Christ, T-Bone Burnett's tall! Ex-wife Sam Phillips must have just come up to his waist.

9:23 PM: What a terrific, innovative year for Best Original Screenplay nominees - Up, The Messenger... and The Hurt Locker gets it. Love all the short, concise acceptance speeches; who will be the first to ramble on into the orchestra?

Ah, so that's why Matthew Broderick (first seen at the red carpet with the wife) is there: to pay tribute to John Hughes, look far more at ease than Molly Ringwald, and show us how much he's aged since Ferris Bueller's Day Off - though, apparently not as much as Andrew McCarthy or especially Judd Nelson, who is headed into Mickey Rourke territory.

9:42 PM: The night's first surprise: the gleefully deranged Logorama wins Best Animated Short. I like me some Wallace and Gromit, but the right short won.

Looks like Best Documentary Short winner Music By Prudence has the first rambling-into-the-orchestra speech of the night!

I've been avoiding seeing Avatar, but dear god I hope everyone in it looks as goofy as Ben Stiller. Quote for the night (as his tail gets tangled): "It's amazing how far technology has come."

9:49 PM: Precious gets Best Adapted Screenplay, which means Up In The Air will likely be entirely shut out. An overcome Geoffrey Fletcher's acceptance speech is the night's most moving moment thus far (and Steve Martin knows exactly how to transition the moment).

Good horror montage, though not as horrifying as the amount of time Zac Efron's stylist spent making his hair look faux-messy.

10:31 PM: Come to think of it, flaws and all, it would be cool to see Inglorious Basterds win another award. Was that Father Time seated behind Tarantino?

10:42 PM: Gee, they must be running late, but of all categories not to show clips for - Best Cinematography??!!! They must have thought that The White Ribbon received enough screen time on the Golden Globes.

Demi Moore must have jumped at the chance to introduce the year o' the deceased because she aint gettin' on that stage any other way.

James Taylor alert! He sounds as alive as the souls being honored.

10:54 PM: Oh, it wouldn't be a true Oscar ceremony without a little interpretive dance (for the Best Score nominees). I was going to say they're trying to avoid cheese (although I would think Sherlock Holmes has nothing to do with West Side Story) but that weird The Hurt Locker sequence could've come from the mind of Corky St. Clair. The lilting, affecting score for Up wins, and deservedly so.

11:09 PM: The Cove wins Best Documentary Feature, so now we have Fisher Stevens, Oscar winner (and the evening's first explicit call to political action via a dolphin text)--but what's up with the swanky swing music leading up to Tyler Perry? Oh, he's so self-deprecating, but I'd rather see him shuffle on stage in drag.

That snuggie bit was worthy of vintage Late Night with David Letterman.

All the awards for The Hurt Locker are a promising sign that we won't have to see James Cameron on stage. Prove me right, Academy!

11:21 PM: "Hey Pedro: your film didn't make the cut this year. Wanna introduce Best Foreign Language Feature as a totally random pairing with Quentin Tarantino?" (although I don't doubt that Tarantino loves his work). Argentinians win and mangle their acceptance speech; Cameron (or is that Haneke?) looks a little peeved.

Oh god, the dialogue from Avatar sounds worse than I feared. And as I look at Kathy Bates, I can't help but think of her fabulous, frightening new character on The Office.

11:37 PM: After a series of exceptionally gushy introductions (Colin Farrell's for Jeremy Renner was the least gushiest and the most genuine), the Dude wins his Oscar, provides a shout-out to his family and, naturally, abides; it appears that he has also imbibed a little tonight, and why not? If this ceremony doesn't wrap itself up before Midnight, I may need another drink myself.

11:53 PM: When Meryl Streep can't even win an Oscar over Sandra Bullock, you know how much of a popularity contest this is. Bullock is extremely likable, and I look forward to the inevitable post-Oscar decline in her career.

11:58 PM: Kathryn Bigelow: "The secret to directing is collaborating." This is why she deserves the award.

12:04 AM: Sorry, Avatar. Well, not really--mark this down as the rare year where the most deserving and relevant film nominated (out of ten!) wins Best Picture.

Steve Martin: "The show is so long that Avatar now takes place in the past." And on that note, good night until next year, when a reactionary academy will probably award the latest Harry Potter film or something like Little Fockers.
Posted by C. Kriofske at 9:39 PM No comments: