Last year at this time, I had already seen my favorite film and heard my favorite album of the year. Here's where we stand for favorites in 2010 so far (in alphabetical order, of course).

David Byrne & Fatboy Slim (and many others), Here Lies Love
Field Music, Measure
Charlotte Gainsbourg, IRM
Goldfrapp, Head First
LCD Soundsystem, This is Happening
Ted Leo and The Pharmacists, The Brutalist Bricks
Joanna Newsom, Have One On Me
Gil Scott-Heron, I'm New Here
Spoon, Transference
Tracey Thorn, Love and Its Opposite
Posted by C. Kriofske at 9:45 PM No comments:

A WALK THROUGH P-TOWN 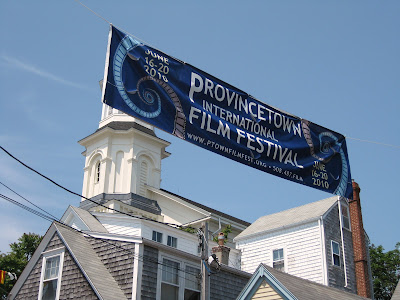 I have sort of a love/hate relationship with Provincetown, an artist colony/gay-friendly tourist enclave on the tip of Cape Cod. 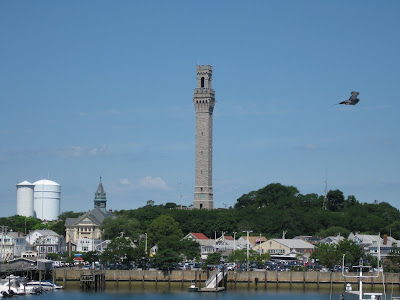 Although the insularity, attitude and marked-up prices on everything tend to grate after awhile, P-Town can be a fantastic, almost otherworldly spot for a weekend getaway, given the right accomodations (I've had a few less-than-ideal B&B experiences); thankfully, we stayed in a nice little rental this time out. 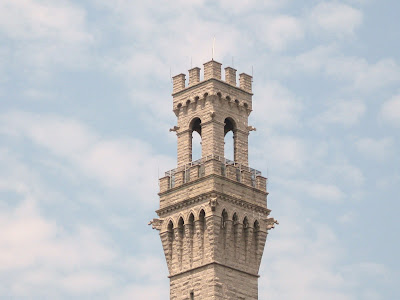 If the town has an identifiable landmark, it's undoubtedly the Provincetown Monument. 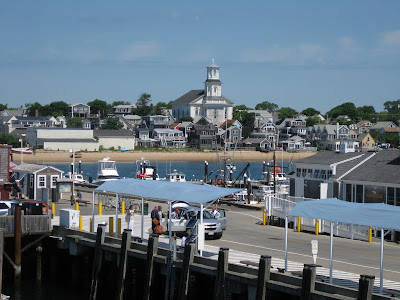 The library (a former church) also stands out among the more rustic Cape homes, although it seems to be in a perpetual state of restoration. 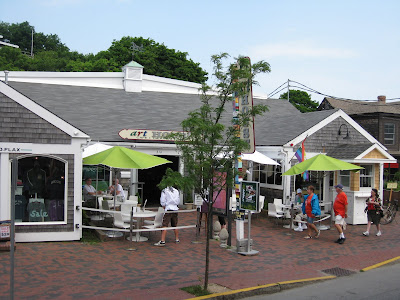 As usual, Steve and I came for the Provincetown International Film Festival (The Art House Cinema, pictured above, is one of its venues). In its 12th year, PIFF is still going strong--most screenings I attended were close to full. I saw many films and gave everything good-to-great ratings, except for a few shorts (I never learn with those festival shorts programs).

Although I skipped out on the awards ceremony, that night I did briefly spot honoree Tilda Swinton (tall, luminous, dressed in white) happily strolling down the main drag. I ran off to notify a few friends, but by the time we returned she and her male companion had disappeared into the night. 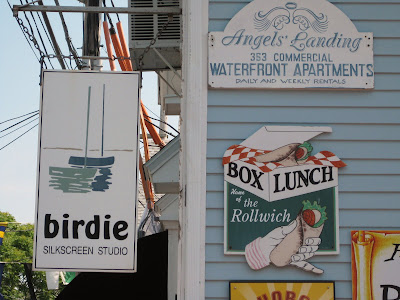 Geographically, P-Town is long and narrow. That main drag, the aptly-named Commercial Street spans from East to West with an overload of signage. 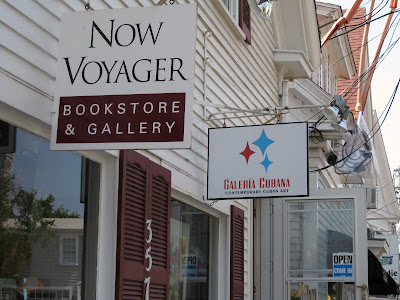 Sometimes, the signs line up in pleasant symmetry... 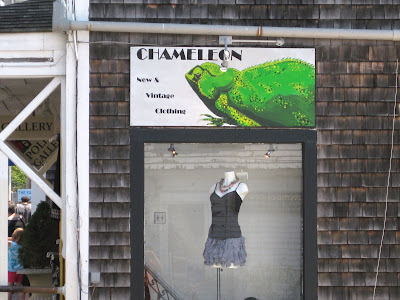 ...and occasionally, one has a wide canvas all to itself. Still, the signs don't entirely distract from the gorgeous gardens that dot the front yards of both businesses and residences: 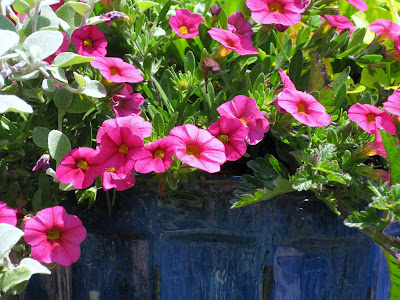 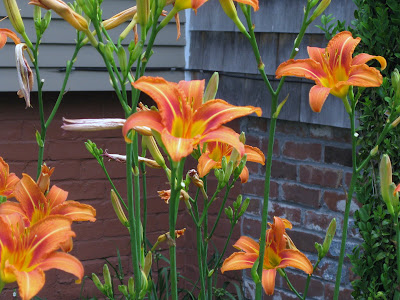 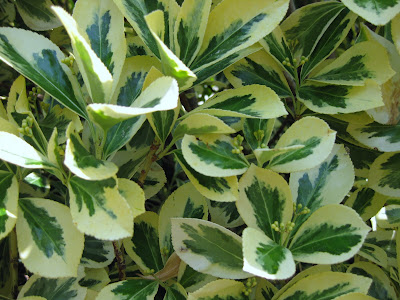 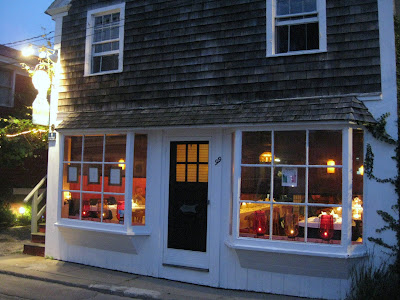 One evening, we checked out my favorite part of town, the sleepy West End. We dined at Sal's, an adorably rustic Italian restaurant. 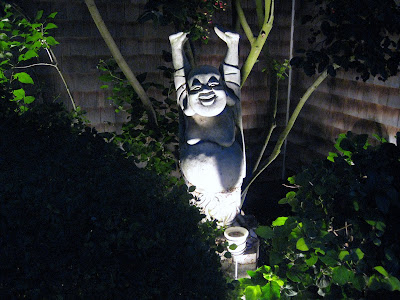 As night fell, a few of the town's oddities surfaced through the coastal fog, such as this jolly, beguiling Buddha... 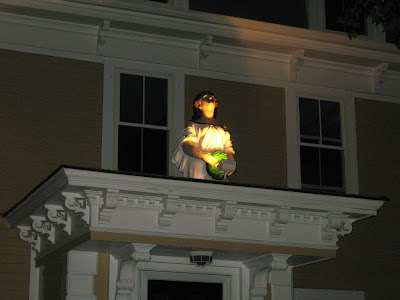 ...and this welcoming (if stoic) statue, which looked like it was once a part of a ship's figurehead. 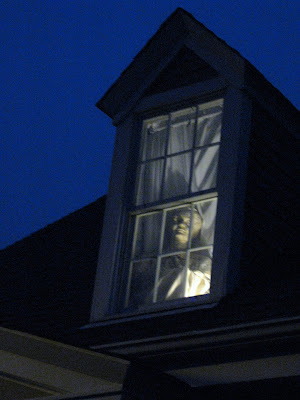 Look closely enough and you may catch something looking back at you. 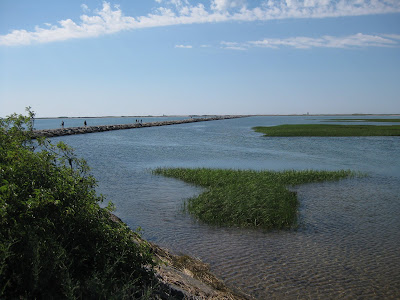 On our final morning in town, we walked beyond the West End to an edge of the world, peering out at the mighty Atlantic. A sight of expansive marshland, the dunes, and a beach (though one can barely make it out from this distance) suggests a multitude of possibilities: 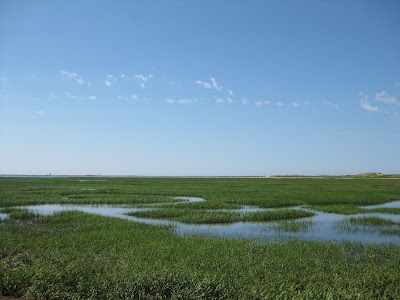 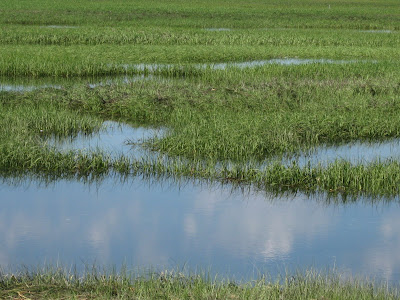 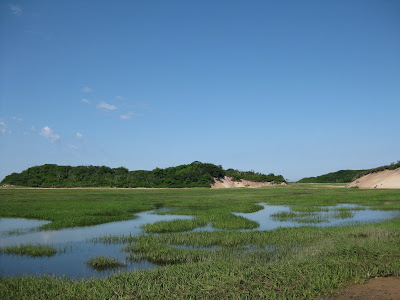 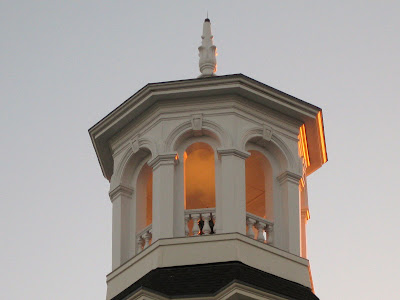 I leave you with a close-up of the library's cupola, illuminated by a peaceful P-Town sun.
Posted by C. Kriofske at 7:58 PM No comments: 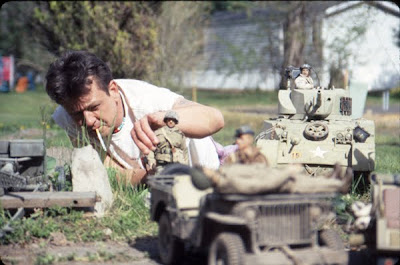 A decade ago in Kingston, New York, Mark Hogencamp was brutally beaten up by five young men in a parking lot. He survived, but with severe physical and even worse brain damage. After a few years of hospitalization that left him mostly healed but still under a lot of psychological distress, his insurance ran out, forcing him to live on his own. Hogencamp’s pre-attack diaries reveal he was a talented sketch artist, but his now-shaky hand prevents him from being able to draw. As a form of self-therapy, he begins to construct dioramas around his trailer home and yard, using the older, larger G. I. Joe and Barbie dolls as models. With time, he constructs his own elaborate town, a Belgian village during World War II whose name gives this documentary its title. If it all sounds incredibly kitschy, it’s not—Hogencamp is completely serious about his creations. He gives the dolls the names of people from his life—the guys who beat him up are rendered as Nazi soldiers, and he utilizes them in oft-gruesome scenarios to work through his trauma. He also takes artful, arresting photographs of the scenes he’s created, and they’re good enough to eventually lead to his own New York City gallery show. Throughout, Hogencamp appears before us as sweet, sad and more than a little fragile, but details about his past gradually surface that considerably deepen and complicate how we see him (particularly the shocking reason why he was beaten up, revealed midway through and too important to give away here). Jeff Malmberg’s film beautifully, profoundly illustrates the process of art-as-therapy, but it’s just as much a riveting account of a fascinating subject.

Easily standing apart from their stern, humorless gray-clad comrades, the young titular characters in this wonderfully weird Russian musical (set in 1955) are the counterculture. They take their cues from the jazz-loving, swing-dancing, zoot-suited Americans of a decade before, but strewn through a kaleidoscopic cross-cultural blender, outfitted in wild, garish, clashing colors, speaking in a beat-derived lingo and meeting up to dance and drink the night away at their own chic Valhalla in downtown Moscow. Mels (Anton Shagin) enters the film as a gawky secret policeman but soon falls under the Hipsters’ allure, much to his fellow workers’ chagrin. Director Valery Todorovsky practically overstuffs the film with elaborate, briskly paced, wildly imaginative musical numbers. Some hit the mark more than others (early on, a slapstick paean to communal living sets a deliriously high standard to match), but HIPSTERS tempers its exaggeration and flash by fully acknowledging the consequences inherent in choosing one lifestyle over another. Still, it’s one of the least dour Russian films you’re ever likely to see, with an infectious, uplifting energy that extends all the way to the finale’s timeless celebration of camaraderie among outsiders.

An adequate documentary about an extraordinary subject, this decade-in-the-making labor of love profiles Stephin Merritt, cult musician and head of The Magnetic Fields (and many other side projects). As a songwriter, Merritt seems out-of-time, his lyrics and melodies recalling the arch, witty (and occasionally breathtaking) wordplay of Cole Porter and Noel Coward. As a musician, Merritt’s positively postmodern, veering from cello-laden chamber pop to toy-store electronic settings to an entire album called Distortion that excessively lives up to its title. However, instead of merely fawning over Merritt’s considerable talent, the film wisely spends more time examining his resolutely deadpan, often difficult personality and relationship with long-term collaborator and friend Claudia Gonson. As they bring out both the best and worst in each other, we get a comprehensive sense of how art and life feed off each other and the also the quandary of being well-known in a particular community but not famous outside of it. But great subjects do not necessarily make for great films, and while it contains no serious missteps, aesthetically, STRANGE POWERS feels a little flat, especially compared to a similar cult-artist profile like SCOTT WALKER: 30TH CENTURY MAN.
Posted by C. Kriofske at 1:01 PM No comments: 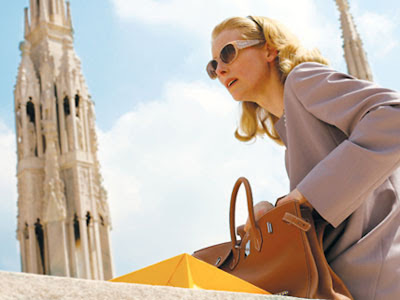 Thought I'd try to get these done before Provincetown, the next film festival I will attend. Here's the first three, with three more to (hopefully) follow.
I AM LOVE

From its opulent and deliberately anachronistic opening credits, this is an unapologetically old-fashioned melodrama, albeit one on crack cocaine with every feeling and stylistic choice ramped up to the nth degree. Centered on a wealthy Milan family, it’s initially difficult to get a handle on who’s who as we’re immediately thrust, with little exposition like an Altman film, into its milieu. The narrative comes into focus as the family’s dying patriarch gives the keys of his textile empire to son Tancredi and eldest grandson Edo, who would rather open a restaurant with his friend Antonio. In time, Emma, Tancredi’s Russian-born wife emerges as the key figure, and not just because she is played by Tilda Swinton (speaking fluent Italian, no less). Even as her character gradually succumbs to the film’s hyperactive emotional state, her magnetic (but not overpowering) presence and steady performance gives viewers something to hold on to. Director/Screenwriter Luca Guadagnino eventually throws in a shocking turn of events that some may have trouble taking seriously (although Guadagnino is deadly serious about it), but it sets the course for an operatic, furiously-edited finale where the thrilling, maddening score keeps building and building until the whole film reaches a heart-pounding orgasm of liberation and resolve. Ridiculously massive and moving, I AM LOVE will not appease those seeking subtlety (or even logic), but for me, its skill and sheer chutzpah ultimately transcended those concerns; I could not stop thinking about it for days.
THE EXTRA MAN
With AMERICAN SPLENDOR, Robert Pulcini and Shari Springer Berman displayed a talent for successfully adapting literary material one wouldn’t expect to easily translate into film. Their attempt to do so with Jonathan Ames’ quirky novel doesn’t fare as well, although they get a sublime, career-capping comedic turn from Kevin Kline as an eccentric, preposterous escort of wealthy old ladies who is somewhat aware of those qualities within himself but doesn’t give a damn about what anyone thinks. In his harder-to-define role as the F. Scott Fitzgerald-loving young protégé, Paul Dano is adorably odd, making good use of his tentative vocal inflections. However, as voices go, a full-bearded John C. Reilly does a lot with very little in a riotous extended cameo. Although the film as a whole doesn’t amount to very much, the actors leave you rolling on the floor at the way they deliver their often bizarre and occasionally witty dialogue.
JOAN RIVERS: A PIECE OF WORK

A year in the life of everyone’s favorite bawdy female Jewish comedienne and plastic surgery punchline, it sets out to prove she’s more than that. Blessed with a desirable arc that follows Rivers from a low point in her career to renewed fame and visibility following her winning “The Celebrity Apprentice”, the film mixes in clips from throughout her career (stretching back to early, electric appearances on “The Ed Sullivan Show”) and threads in pieces of a recent stand-up performance at a small club. At 75, she’s as bitingly hilarious and risqué as ever, but we catch fleeting, telling glimpses of another persona—an insecure workaholic deathly afraid of becoming irrelevant, sensitive about subjecting herself to a Comedy Central roast and expressing frustration at her reputation as a brilliant comedienne but not a great actress. One may find it hard to muster up sympathy for such plaints given her continued success, but the film gains momentum and purpose by exploring how much her ability to work and keep pushing herself is a life force: you feel it’s as essential to her as breathing.
Posted by C. Kriofske at 1:59 PM No comments:

If not the most gifted or versatile Golden Girl, she had her moments, like this joyously absurd monologue that certainly stands out from the era's all-too-wacky/normal sitcom conventions. R.I.P., Rue.