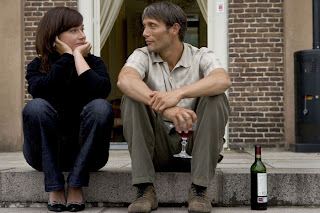 When did the word "melodrama" acquire such a negative connotation? One of the worst things you can currently say about a movie is that it feels melodramatic. In fact, I've praised many a film for not containing a hint of melodrama. However, there have been great, intelligent transcendent melodramas from Sirk to Bergman and beyond; it's just a difficult genre to master.
Danish director Susanne Bier's latest, AFTER THE WEDDING is unabashedly a melodrama but don't let that deter you. Despite a somewhat predictable, occasionally clumsy screenplay, this is far from a made-for Lifetime TV production. All you need to know about the story is that it involves Jacob (Mads Mikkelsen), a manager of an orphanage in India, Jorgen (Rolf Lassgard), a wealthy Copenhagen entrepreneur whom Jacob is seeking a grant from, and a flurry of revelations that come about when the two men meet; prior knowledge of anything else will seriously diminish the film's impact.
It all works because Bier tempers the story's soap opera tendencies with a charged yet intimate style and pace. The camera breathlessly swirls around the action, offering many close-ups of faces (with a particular, peculiar emphasis on the eyes) to the point where it feels like you're watching a less cerebral and austere but just as thoughtful (and wrenching) Bergman film. Mikkelsen and Lassgard are both excellent, as are Sidse Babett Knudsen as Jorgen's wife Helene and Stine Fischer Christensen as their daughter, the youngish, adorably mousy Anna. AFTER THE WEDDING is a lesser, more conventional film than Bier's previous one, BROTHERS, but it's also a good, accomplished melodrama made by people who know what they're doing.

Bier's longtime co-screenwriter Anders Thomas Jensen is director in his own right, but his exceedingly black comedies have very little melodrama in them. The narrative of ADAM'S APPLES sounds like a sick joke (and that's exactly what it is): Adam (Ulrich Thomsen), a paunchy, middle-aged Neo-Nazi, is released from prison and sent to do community service in a rural church presided over by his opposite in temperament, Ivan (Mikkelsen again). The latter is a cheery priest who suffers from grand delusions that all of the bad things happening to him are a test from God. It's a rather silly, broad film, but at the very least, Jensen creates a delightfully absurd tone, whether he's needlessly killing a somnambulant cat or daring us not to laugh at a brain damaged child. Someday he may even make a great, biting satire. This isn't one, but it has a lot to recommend it: gorgeous scenery and cinematography, a deft, brave comic turn from Mikkelsen, and some inspired lunacy here and there—much of it involving a cover of a certain Bee Gees song. Oh, those wacky Danes.
Posted by C. Kriofske at 2:14 PM No comments: 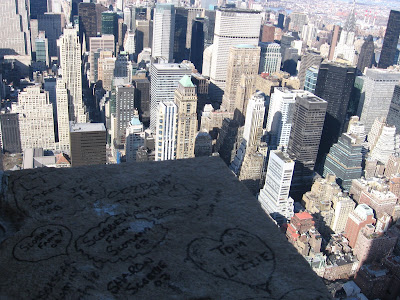