Nearly a decade in Boston, and I’d never set foot in the Institute of Contemporary Art (ICA). I’d walked past the old firehouse on Boylston Street (where it was housed until recently) many times, but I never made an effort to check it out—and I like contemporary art, even if I don’t know much beyond Warhol and Rothko. 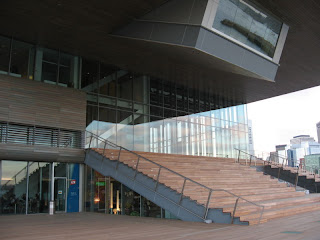 The ICA moved into fancy new digs along the South Boston waterfront last December. I remember seeing it as an unconventionally shaped, abstract work-in-progress last summer and thinking, “That’s it?” Of course, the new facility is itself a work of art (much like what Santiago Calatrava added on to my hometown’s art museum). All of the galleries are on the top-heavy fourth floor; the third hosts a spacious, airy theatre/performance space, the second has a digital studio and the first is home to all the usual museum amenities (gift shop, restaurant, etc;).

Although the ICA is a relatively small museum, the main East and West Galleries hold so much stuff they’re a little overwhelming. Every medium is adequately represented in the permanent collection, from painting and photography to sculpture and video installation.

As for special exhibitions, there’s a “Tropicalounge” by groovy Brazilian artist Sergio Vega (complete with vintage album covers from that other Sergio au go-go, Mendes), and work from four upcoming artists vying for the James and Audrey Foster Prize. Kelly Sherman's minimalist pieces won the award earlier this week, but my favorite was Rachel Perry Welty’s work with disposable objects (like twist ties) and the fascinating “Food Pyramid”, a painstakingly intricate arrangement of miniature versions of grocery-store product boxes.

However, what really moved me to check out the ICA was a movie. They're beginning to show feature films on Sunday afternoons, and I caught the documentary WHO THE $#%& IS JACKSON POLLOCK. It had played at the Provincetown film fest last summer and was picked up for distribution by Picturehouse (the folks who brought you A PRAIRIE HOME 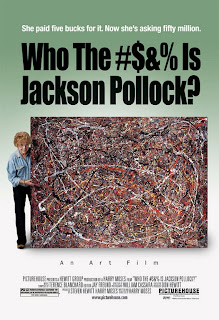 COMPANION) shortly thereafter. I’m surprised they haven’t given it a wider release, for it’s a wonderful documentary that deserves at least a SHUT UP AND SING-sized audience.


POLLOCK profiles the inimitable Teri Horton, a retired truck driver and junk collector who bought a painting at a thrift shop for five bucks. When someone tells her the giant, messy splattered canvas looks an awful lot like a Jackson Pollock (prompting a response that gives the film its title), Horton sets off to determine just how much her find is worth.

According to the hermetic New York art elite, it's not worth anything, even as Horton slowly gathers the support of outsiders and some forensic evidence in her favor. More than just an amusing character study, the film gives insight as to how art acquires (and requires) legitimization. Horton obviously doesn't fit the mold of the respectable art collector, but her story is fleshed out to the point that she always endears, even when she's duplicitous: her tale of the artwork's origin (made up to account for the lack of provenance) is a highlight, particularly because even she knows how ridiculous it is. Her quest may never amount to a multi-million dollar payoff, but POLLOCK shows us the struggle here is as worthy as any goal.
Posted by C. Kriofske at 9:42 PM No comments: 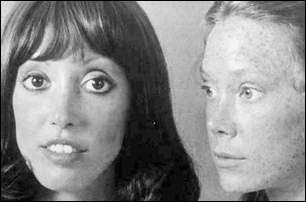 Spooky, huh. My essay on Robert Altman's 1977 film (starring Shelly Duvall and Sissy Spacek, above) is up on the Brattle's Film Notes blog. It's certainly on my shortlist of favorite Altman, along with McCABE & MS. MILLER, THE LONG GOODBYE, NASHVILLE and GOSFORD PARK. For years, I never knew it existed because it was impossible to see outside repertory houses and film archives. It finally came out on an adequate (not deluxe) Criterion Collection DVD three years ago. Thanks to my Amazon.com wish list, more than one person gave it to me as a gift this past Christmas.
Posted by C. Kriofske at 10:15 AM No comments: