YOU'RE A PIECE OF WORK, CHARLIE BRANASKI

Oh my, this is wrong, wrong, wrong, but incredibly funny and dead-on: Charles Schulz's Peanuts, if it were written by Charles Bukowski. As a lifelong fan of the former, I can appreciate a parody as long as it's this sharp. 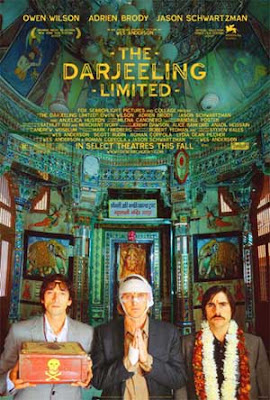 Very little on this green Earth excites me as much as a new Wes Anderson film. It opens the New York Film Festival on September 29 and is scheduled to hit theaters a week later.
Here's the trailer. It looks like textbook Wes Anderson goes to India. Haters won't find anything new to love; I can't wait to see it.
Posted by C. Kriofske at 10:26 PM No comments: 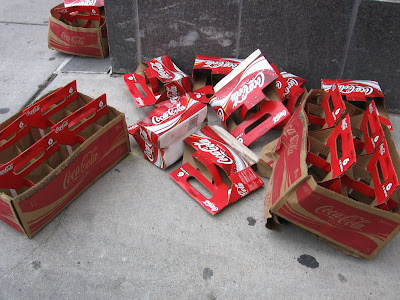 I've just had way too much caffeine and decided it was time for a name change.
Posted by C. Kriofske at 10:33 PM No comments:

Check out Nathan Rabin's hilarious essay on SGT. PEPPERS LONELY HEARTS CLUB BAND (the 1978 movie, not the 40-year-old album) in The Onion's AV Club blog. This sentence alone is (as they say) worth the price of admission:

The closing number is a maraschino cherry of awfulness atop a ten-scoop Sundae of pure crap.

Although I've made ample time to watch such notorious flops as XANADU and CAN'T STOP THE MUSIC, I haven't seen this film and I'm a little afraid to. Even I have a threshold that can't fully support the idea of Peter Frampton and The Bee Gees slaughtering and trivializing Beatles songs with the bloated excesses of an era not immune to laboriously bad taste... I'd probably have to get liquored up first.

And yet, I can watch this over and over again. At least with SGT. PEPPER'S, I have a feeling you could discern what kind of audience it tried to court (no matter how misguidedly), but THE APPLE is just flabbergasting with its futuristic world of "1994", over-the-top musical extravaganzas (including one full of synchronized sex and a Donna Summer sound-a-like) and many, many sequins. It's worse than its two brethren (mentioned above) in the 1980 post-disco, pre-new wave, all-camp terrible trio, but it's fascinatingly bad, and that's the difference.
Posted by C. Kriofske at 2:43 PM 1 comment:

Two of these could likely end up on my year-end Top Ten list, and they couldn't be more different from each other. 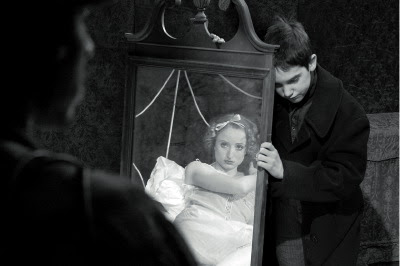 THE BRAND UPON THE BRAIN!
This initially seems a tad less accessible than Guy Maddin's previous best work, THE SADDEST MUSIC IN THE WORLD. The story is as deranged as ever, involving a marooned orphanage, a gender-bending teenage detective/harpist, and a sinisterly-derived fountain of youth nectar, among many other quirks. With intertitles and voice-over narration (by the incomparable Isabella Rossellini) in place of any spoken dialogue, it proceeds at a hallucinatory pace: the images often bleed into one another, the intertitles fly by rapidly and occasionally repeat as if we were watching remnants of long-buried film reels (at times resembling a cubist painting come to life), and the lurid action reaches multiple crescendos.

It's no coincidence Maddin recently wrote about underground auteur Kenneth Anger in Film Comment—here he repeatedly injects his own sensibility into Anger's style, but the effect is neither tribute nor copy but its own excitable, idiosyncratic creation. Simultaneously pushing and pleasing his audience, Maddin reaches a great apex here: BRAND is far more involving and relatively easier to follow than his earlier films but thankfully, it doesn't compromise or dilute what made them so delightfully eccentric. (5/5)

BROKEN ENGLISH
Here's a tale we've heard before: Nora (Parker Posey), a woman in her mid-30's, is in pre-midlife crisis mode. Her administrative hotel job neither challenges nor fulfills her and she has yet to truly fall in love. Substitute a few words and you have the plot of a dozen other art-house chick flicks. So, how does BROKEN ENGLISH stand out from them? First, Posey is well-cast and well-tempered, fully expressing Nora's complexities and neuroses without overplaying them. Second, the situations director/writer Zoe R. Cassavetes places her in seem real and relatable without feeling clichéd, from an impulsive, disastrous affair with a narcissistic actor (a perfectly fatuous Justin Theroux) to an impromptu trip to Paris with her best friend (a nicely curt Drea De Matteo). When Nora finally meets a potential romantic partner in Julien (Melvil Poupaud), we watch all the little details accumulate in the subsequent affair and get a vivid sense of character, place, chemistry and conflict. Cassavetes doesn't even come close to attaining the weight and originality of her father John's maverick work, but she doesn't talk down to her audience, either. She's the third Cassavetes sibling to make a film, and by far the most promising one. (4/5)

RATATOUILLE
Brad Bird’s first two animated features (THE IRON GIANT and THE INCREDIBLES) heightened my anticipation for his third, which has an unlikely premise: a rat with an enhanced sense of smell longs to be a great chef in a Parisian restaurant and realizes his goal with the help of a klutzy human friend. Fortunately, RATATOUILLE is a fine, rich dish. The gorgeous, detailed computer animation makes earlier Pixar films seem like embryonic sketches, the cast of voices is pitch perfect without being too celebrity fueled and thus distracting (most recognizable is Peter O’Toole as a deliciously snooty food critic), and a few sequences approach Rube Goldbergian levels of intricacy.

None of that would matter, of course, if it all wasn’t in service of an excellent, unexpectedly affecting narrative. The story not only speaks volumes about how talent and drive go hand in hand to create great art, but also dissects what an audience’s role is in consuming and comprehending it. While entertaining and populist, Bird’s films have always operated at a level of sophistication higher than most of his peers, and this may be his most lithe, ingenuous creation yet: it bursts with creativity and passion and is refreshingly devoid of cloyingness and cynicism. My compliments to the chef. (5/5)

SICKO
To paraphrase an expression one of my colleagues loves to use, I am so over Michael Moore. His earlier movies and TV shows were amusing and unsettling in equal amounts, but he jumped the shark with FAHRENHEIT 911, a film that I liked at the time but now remember as a well-intentioned but clumsy diatribe that's more propaganda than anything resembling artistic merit. Fortunately, SICKO has more of the latter. Pushing for universal health care, Moore makes his most convincing, provocative argument since ROGER AND ME. It helps that he's picked a cause most people can champion and it's to his advantage that he spends less time on camera. Still, I'm having trouble with little things I could overlook before: his condescending voiceovers, his one-sided examples and reasoning, the stunts that don't seem ingenuous as they once did. I appreciate what Moore's trying to do, and the film simmers to a fine boil of outrage and enlightenment; it also hints, more than ever, that the guy is a one-trick pony. He needs to make a different type of film next time out—perhaps one that shows more than it tells. (3/5)
Posted by C. Kriofske at 6:30 PM No comments:

Two of these are festival films still without American distribution, two are from Japan, one is from Korea, one is from Turkey, two have already won Academy Awards. That leaves two other films, both of them directed by women. I'd elaborate further, but I really must go to bed.
Posted by C. Kriofske at 12:46 AM No comments: