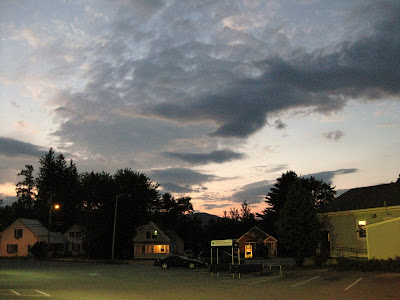 When in Maine, we usually stay close to the coast: Portland, York Beach, Freeport. For a change, we visited the charming, sleepy town of Bethel, about 70 miles Northwest of Portland in the Western Maine mountains. Dotted with modest inns, restaurants and shops (and no recognizable chains), it has a fairly unassuming Main Street, except maybe at sunset. 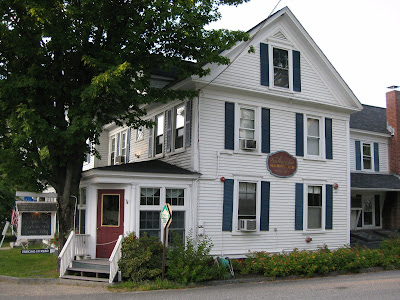 We stayed at the Sudbury Inn; you can see our room here on the second floor's front corner. Apart from the complimentary breakfasts, we did not dine at the Inn's restaurant, although we frequented the subterranean Suds Pub more than once. 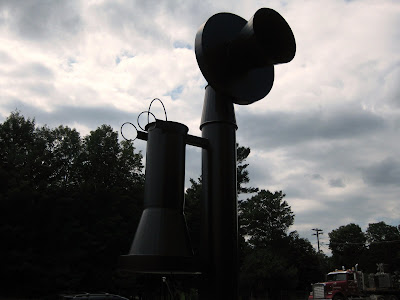 Most of Western Maine contains a refreshing lack of kitsch; I'm not sure this gigantic phone in Bryant Pond (about 10 miles down the road from Bethel) even qualifies as such since it's a memorial sculpture dedicated to Barbara and Elden Hathaway, owners of "the very last hand crank magneto telephone system" in the country. 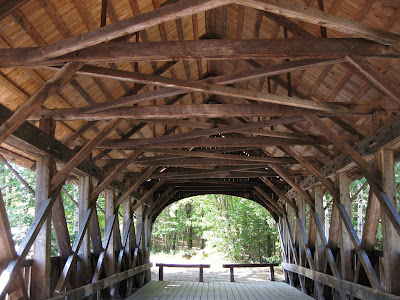 Steve and I came to Maine not only to celebrate our anniversary, but to get out of the city and commune with nature. Our first stop was at the Sunday River covered bridge in nearby Newry. 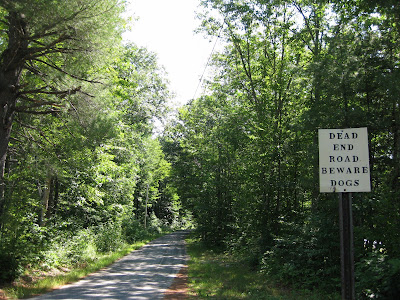 Across the street, I spotted this curious, obviously hand-made warning. It's two, two signs in one! 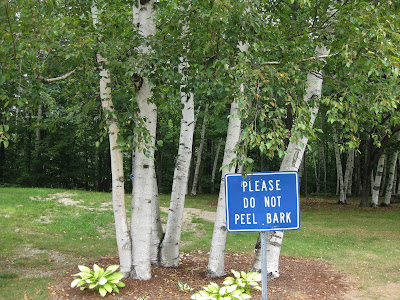 The region is full of signs I've never seen before, like this one at a Route 2 rest stop. Naturally, it entices me to peel those birches all the more. 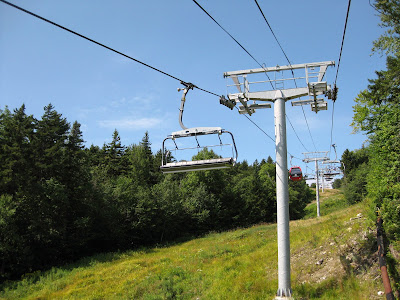 After the covered bridge, we ventured over to Sunday River itself, a vast ski resort that attracts hikers and bikers during the summer months. We took the "chondola" up the hill... 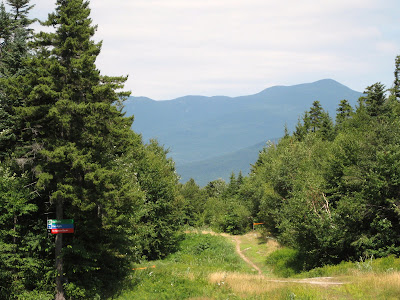 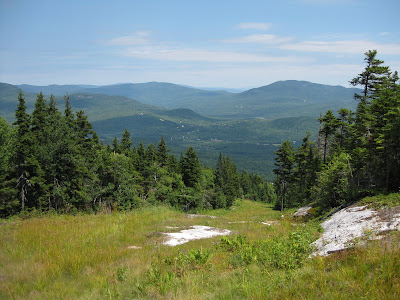 Encouraged by one of the resort's friendly staff, we took an impromptu hike up to Barker Mountain. On a Sunday morning, we had the trail practically all to ourselves... 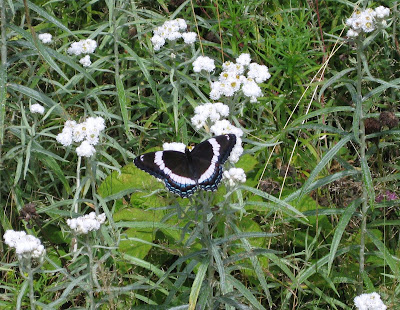 ...except for an assortment of butterflies. I swear this one actually posed for us. 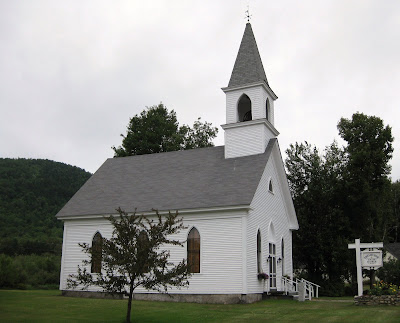 The next day, we visited the White Mountains across the border in New Hampshire. On the way, we made a pit shop in teeny tiny Shelburne because this lovely old church caught our eye from the highway. 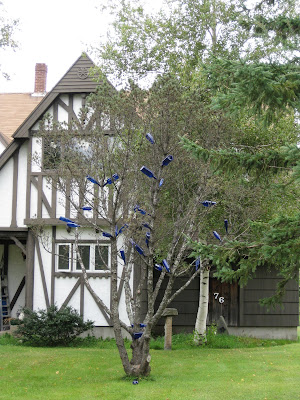 Next door to the church: I'm guessing Cobalt Blue Wine Bottle trees are indigenous only to Shelburne. The White Mountains teemed with fog--spooky, but eerily beautiful. We took a "zipride" at another one of the local resorts. It was like riding downhill in a chondola, only you're tightly strapped into a single seat and your arms and legs flail about. No pictures because they wouldn't let you ride with a camera, but sadly the ride wasn't quite as exciting as it looked from the ground. 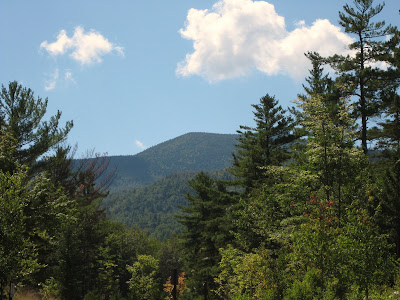 Eventually, the fog lifted, and we drove along the Kancamagus Highway, which runs east to west through the mountains. 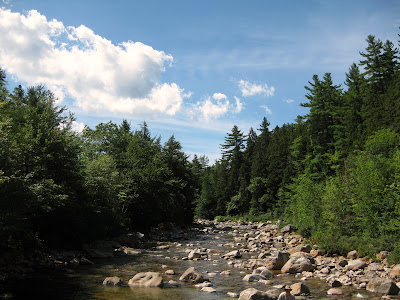 We made a number of stops along the way, the most memorable being the Rocky Gorge Scenic Area where the water was as vivid and clear as the bold, blue skies. 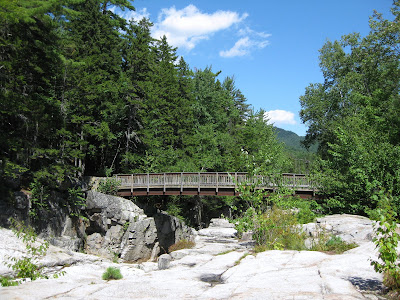 I could have spent hours lazing about there.

Overall, there wasn't a heck of a lot to do in Bethel and the surrounding area; three nights was probably just the right amount of time. Fortunately, I didn't mind the languid pace. For once, it was nice not having any place particular to be. I leave you with a few scenic overlooks along the Kancamagus: 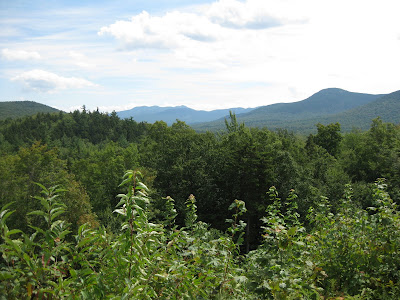 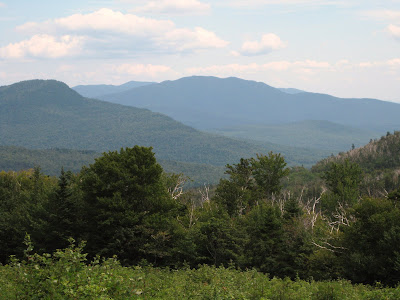 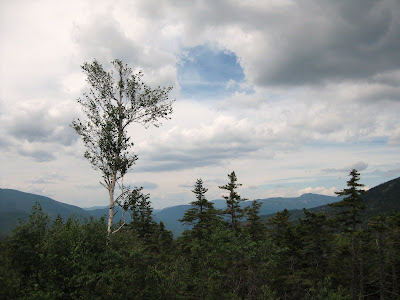 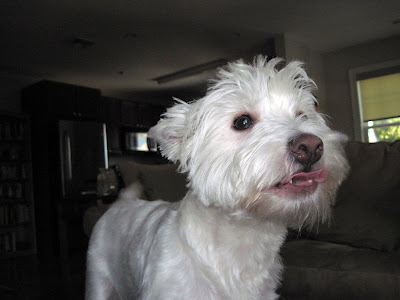 Obviously, Five Things will not be a weekly feature; at this point, who knows if it will return at all. I don't care, I'm on vacation! In the meantime, enjoy this pic of Maggie my parents took during their whirlwind visit last week, and check back later in the month for some potentially ambitious stuff.
Posted by C. Kriofske at 11:37 AM No comments: