Here are my top ten films of '08 so far, in alphabetical order.

4 MONTHS, 3 WEEKS AND 2 DAYS
I first saw this tense, provocative, much-lauded Romanian film at Toronto last fall. On a second viewing during its Boston release in January, I loved it just as much.

CHRIS AND DON: A LOVE STORY
A documentary about the writer Chris Isherwood and his lover Don Bachardy and an illuminating portrait of any long-term relationship, gay or otherwise. (opens in Boston July 18)

THE FLIGHT OF THE RED BALLOON
Hou Hsiao-hsien's first film to be made outside Asia may be both his most accessible and poetic.

MAN ON WIRE
A splendid, moving account of Philippe Petit's 1974 tightrope walk across the World Tade Center towers. (opens in Boston in August)

REPRISE
Since my review from about a month ago, this Norwegian film has stayed with me more and more--in retrospect, its flaws seem minor in relation to the film's accomplishment and impact.

THE TRACEY FRAGMENTS
If it weren't for JUNO, you know this groundbreaking Canadian indie never would have played south of the border; more than even MY WINNIPEG, expect this one to be a future cult classic.

THE VISITOR
My other favorite from Toronto, I haven't seen it again during its US release. But I'm ecstatic that a film that could've so easily fallen through the cracks has reached the robust (by indie standards) audience it deserves. It proves that in some rare cases, great reviews are all a little film needs.

Also worth seeing: ALEXANDRA, AT THE DEATH HOUSE DOOR, THE AXE IN THE ATTIC, THE BAND'S VISIT, CHOP SHOP, ENCOUNTERS AT THE END OF THE WORLD, JELLYFISH, PAGEANT, SONG SUNG BLUE, TOWELHEAD
Posted by C. Kriofske at 11:45 AM

I spent last weekend at the ever-fabulous, ever-exhausting Provincetown International Film Festival. Saw many great docs and one very good fiction feature; reviews are coming in another week (probably two).

Here are a few snapshots from when my time in town was winding down: 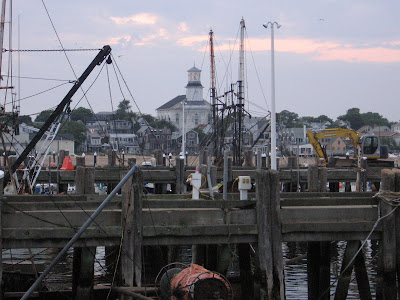 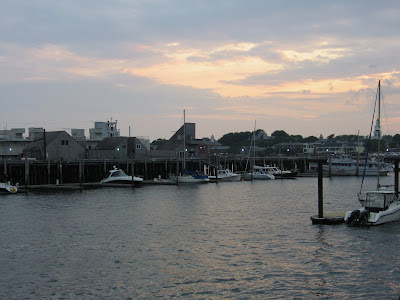 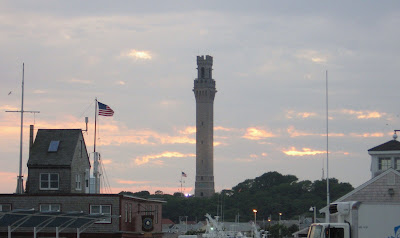 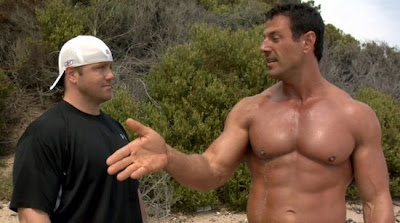 As a short kid growing up in Poughkeepsie in the 1980s, Christopher Bell and his brothers Mark and Mike were picked-on outcasts until the tremendously pumped-up likes of Hulk Hogan and Arnold Schwarzenegger came along and saturated American pop culture. In emulating their heroes, the three brothers became gym rats and all sought careers as professional wrestlers and weightlifters. All three also eventually tried anabolic steroids to stay competitive in a world of ever-stronger, more muscularly enhanced men (and women). Mark and Mike continued to use them; citing personal and moral issues regarding the drug, Christopher stopped using after awhile and made this documentary.

In examining the drug's increased usage in bodybuilding, wrestling and other professional sports, Bell strives to show how symptomatic it is of America's desire to be the best in everything, not settling for number two. For the most part, he succeeds. Obviously influenced by Michael Moore (whom he resembles vocally), Bell takes a far less slanted approach to his thesis. Although the subject matter is personal and set up as such, he approaches it from nearly every possible angle: inquiring about both the positive and negative effects of steroids, who uses them and why, and the subtle differences between them and the array of other performance enhancing drugs on and off the market. I was impressed with many of the unexpected things he considered: in one scene, he interviews a man living with AIDS who greatly benefited from the drug; in others, he uncovers the disturbing but telling rationalization many athletes (such as Barry Bonds) make for lying about using the drug: everyone else does it.

At times, Bell is both too earnest and a little exhaustive: there's enough material for one and a half films and as it drags a little in its last half-hour, the impact lessens. He also could stand to use less of Moore's shtick, such as the occasionally cutesy music or stunt (in one of the latter, he employs some illegal immigrants to make seem performance enhancing drugs in his home). But Bell makes a convincing case against illegal steroid use; as for whether they're "good" or "bad", he doesn't obscure the many shades of grey that question raises.
Posted by C. Kriofske at 12:07 PM No comments: 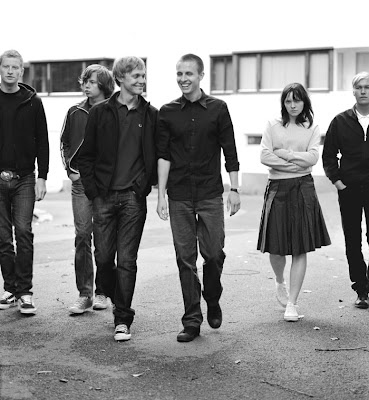 REPRISE is far from the first film to capture the ebullience of being a young adult, but it is one of the rare ones to consider the full spectrum of post-adolescence emotions. Both the thrill of having an entire adulthood ahead of one's self and all the anxieties and uncertainties that come with the territory are given equal measure.
We meet best friends Philip (Anders Danielsen Lie) and Erik (Espen Klouman-Høiner) as they simultaneously deposit manuscripts of their first books into a mailbox. Immediately, an omniscient narrator accompanies a breathlessly paced montage of the subsequent acclaim and intellectually stimulating adventures bestowed among these two young men and their published works--but it's only an idyllic version of what they hope will happen. In actuality, Philip's book is published, but Erik's is rejected. Six months pass, and the film resumes with Erik and a few friends driving to a mental health facility to pick up Philip, who is recovering following a suicide attempt.
From there, the film proceeds forward, with a few carefully chosen flashbacks. We learn that Philip's collapse was partially brought on by the end of a brief but passionate, obsessive relationship with Kari (Viktoria Winge). As Erik takes care of his friend, finds a publisher for his own book and slowly grows disillusioned with his surroundings, Philip has lost the will to write, or do much of anything. When Kari re-enters his life, his behavior increasingly points towards signs of serious mental illness (rather than stress) that may be to blame for his malaise. All three leads are very good: Lie keeps Philip from coming across as too much of an enigma, Winge tackles the girlfriend role with grit and subtlety, and Klouman-Høiner holds our attention even as his character is the film's most normal and least angst-ridden.
In his first feature, Norwegian director Joachim Trier proves himself a skilled borrower: the narration is straight out of Y TU MAMA TAMBIEN, the graphics and narrative construction are reminiscent of TRAINSPOTTING, and the overall attitude reeks of French New Wave (particularly Godard). Despite all this, he's not a poseur, for as REPRISE recalls these touchstones, it often feels nothing like them. The pacing and drained-out colors are more common to a Dogme film, and the tone is moody and atmospheric but not pretentious. As much as Trier loves his ambitious characters, there's a sense of detached wisdom towards them that keeps the film from feeling contrived.
Posted by C. Kriofske at 11:31 AM No comments:

Here's something I was unable to fit into my Coolidge Corner photo essay. Two questions: 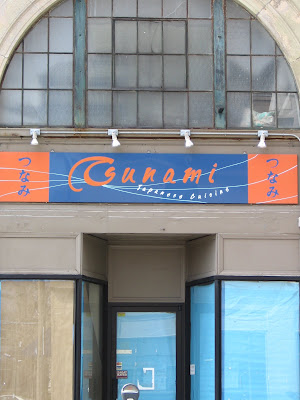 1. When was this picture taken? 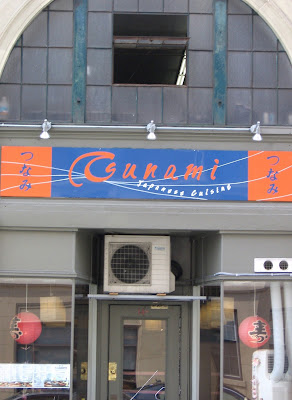 2. And when was this picture taken? The answer to both: 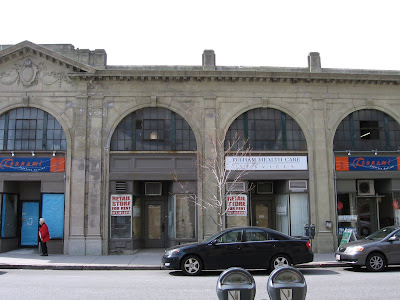 Why, at the same time, of course. This sushi joint's original location was on the left; about two or so years ago, it opened up a second location on the right, meant to be a luncheon counter, I believe. And yet, the entire restaurant has moved over there, while the first location has been shuttered. And it's stayed this way ever since. How strange...
Posted by C. Kriofske at 12:08 PM No comments: