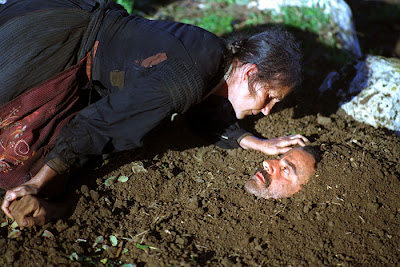 Emanuele Crialese's film puts a novel spin on the oft-told tale of Europeans immigrating to America in the early 20th Century: instead of fixating on a traveler's first few proud, iconic moments in the new world, THE GOLDEN DOOR is about what comes before. It follows the Mancusos, a Sicilian family headed by widowed father Salvatore (Vincenzo Amato), his skeptical, superstitious mother and his two teenaged sons.

After a slow, somewhat cryptic start, the film finds its rhythm once the Mancusos reach the overcrowded boat to America. There, the men of the family are charmed by and in awe of Lucy (Charlotte Gainsbourg), a beautiful, comparatively wealthier Englishwoman whose reasons for emigrating with hundreds of Italians is not immediately clear (she's possibly the only person on the boat without exceptionally dirty fingernails). Crialese meticulously recreates what the trip really would've been like all the way to Ellis Island where the incoming are poked and prodded both physically and mentally before they're allowed citizenship (or not).

To these people, America is only a concept, and often a misconception stirred by tall tales and doctored photos of money literally growing on trees. Crialese honors this notion by never showing us (or his characters) any sweeping vistas of the Statue of Liberty or the Manhattan skyline: we're just left with hearsay and dreams, and they suffuse the film with a mysterious, compelling aura. Agnès Godard's cinematography is superb as usual, and her intuitive style meshes well with the director's approach. The whimsical final shot and closing credits, in particular, nail what this unique film is all about—I walked away from it nearly beaming with joy.
Posted by C. Kriofske at 1:08 PM