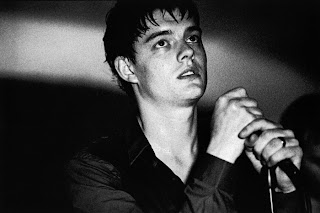 Why did Joy Division vocalist Ian Curtis hang himself at the age of 23? Was it misery brought on by marital infidelity, an uneasy mixture of meds prescribed for his epilepsy, stress at the onset of fame, or was he just terminally depressed? As with many suicides, the actual motive remains as inscrutable as the man himself. Fortunately, the Curtis biopic CONTROL fully acknowledges this as it admirably attempts to piece together whatever portrait it can of its subject.

Curtis (Sam Riley) is introduced as a moon-faced, Bowie-adoring teenager in 1973. He’s a slacker and a dreamer, but also a bit of a goofball—there's little inkling of the brittle, austere music he’d make a mere five years later. He meets and weds his wife, Debbie (Samantha Morton) at a perilously young age; not long after, he meets his three future band mates at a Sex Pistols concert, which moves him to become a musician, although perhaps move is too strong a word—he volunteers to be a singer with the same affable neutrality as if he were offering someone a ride home from the pub.

The film is most effective when it focuses on Curtis and the band writing, rehearsing, recording and performing their tense, ominous music. As someone only familiar with their best-known song, “Love Will Tear Us Apart”, I instantly understood why Joy Division were so groundbreaking and why this film was made. Much of the credit goes to Riley, who thrillingly exhibits how effortlessly Curtis transformed himself on stage into a spastic, charismatic, one-of-a-kind front man. The rest of the band were obviously cast for their uncanny resemblances to the genuine articles, but their involvement goes beyond mere mimicry—I was floored to find out that the four actors actually performed much of the music in the film.

This is photographer Anton Corbijn's first directorial effort, and it's shot in the moody, high contrast black-and-white style he’s known for. Although often beautifully framed, the images aren’t glossy or overly pretty, lending an authentic air to the film’s grimy, late '70s Manchester setting. There are a few missteps: two brief voiceovers from Curtis aren't really needed, and I cringed when "Love Will Tear Us Apart" appeared on the soundtrack at the most obvious, literal moment. However, most of the film is as economical and crisp as the band's music. With precision and grace, Morton also works wonders with what could've been an inconsequential role.

Adapted from a book by the real Debbie Curtis, CONTROL may prove frustrating for someone fanatically devoted to the band and Curtis' legend. It's a lot to live up to, and as with nearly every biopic, you also sense that it leaves stuff out. In this case, it's often difficult to comprehend how Curtis got from point A to point B. Regardless, this particular version of his life is compelling enough, even if it's more an elegy than a document.
Posted by C. Kriofske at 10:54 PM