What an amazing year for film--possibly the best since 2001, which gave us this, this, and this, among many others. Let's see how '07 compares...

1. THERE WILL BE BLOOD
Paul Thomas Anderson’s dizzying period saga about a self-made oil tycoon practically defies all expectations (and perhaps logic): it’s undeniably epic yet intimately rendered, seemingly a throwback but feeling entirely new, predominantly exhausting yet altogether exhilarating. It opens daringly without any dialogue (substituted by Jonny Greenwood’s striking, innovative orchestral score) and ends, two and a half hours later, with an extended lunatic exchange people will be quoting from for years to come. Daniel Day-Lewis takes his cartoon-come-to-life persona from GANGS OF NEW YORK and deepens and shapes it into a multi-faceted enigma, while Paul Dano is nearly his equal, especially whenever preaching himself into a vicious frenzy. THERE WILL BE BLOOD is like manna from heaven for film lovers: it shrewdly draws upon conventions from a century of cinema and simultaneously, ingenuously rewrites them. Should every film this utterly bleak be so much fun to watch. 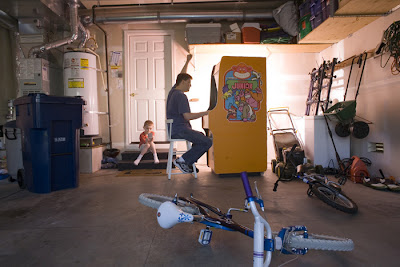 2. THE KING OF KONG: A FISTFUL OF QUARTERS
I never expected a look at competitive video game players to end up my favorite documentary of the year, much less a serious contender for the overall top spot. It just goes to show that you can make a good film about anything—or does it? From a distance, we can laugh at (or lament) people like Billy Mitchell, a mullet-sporting hot sauce magnate still living off the fame and prestige granted to him by a Donkey Kong championship he won over twenty years earlier, even as affable unemployed family man Steve Wiebe challenges his all-time high score. But as director Seth Gordon uncovers a fascinating subculture he also structures a classic, nail-biting good vs. evil tale out of it, one that’s instantly recognizable and involving amidst all the peculiar (yet entertaining) behavior on display. 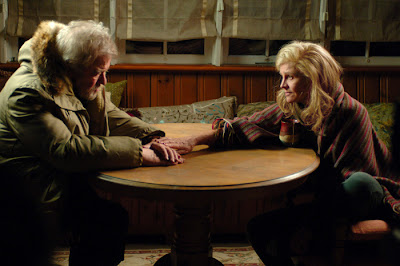 3. AWAY FROM HER
As an actress, Sarah Polley exudes beauty, grace and a subdued intuitiveness that’s rare among her peers. Those qualities are abundant in her outstanding directorial feature debut, an elegiac adaptation of an Alice Munro short story. Refreshingly unsentimental in how it approaches aging and loss, the film provides a luminous Julie Christie with the role of her career as an Alzheimer’s patient, while Gordon Pinsent is considerably underrated as her longtime husband—arguably the trickier role to pull off. Polley lets the narrative’s subtleties delicately surface like frost on a windowpane, gently propelling the film towards a closing, reconciliatory sequence (scored by K.D. Lang’s soaring cover of Neil Young’s “Helpless”) that is among the most poignant and jubilant I’ve seen. 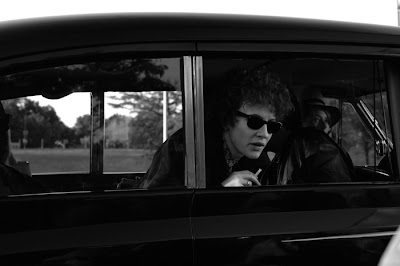 4. I’M NOT THERE
Not merely the ultimate Dylan film, this kaleidoscopic study of the 1960s often plays like the ultimate Todd Haynes film. The director’s oft-intriguing, sometimes ballsy conceit of employing six actors to portray different Dylan-esque characters is just the beginning: practically everything Haynes puts on screen signifies something and it’s thrilling just to anticipate what will appear next. The mere idea of Cate Blanchett embodying Bobby circa DON’T LOOK BACK is brilliant in how it deconstructs the man’s ever shifting persona (and Blanchett’s stunning, convincing performance goes beyond mimicry in doing so). I’M NOT THERE is messy yet revelatory filmmaking—even the much maligned Richard Gere sequences offer insight into an era, its death, and how its principles continue to regenerate. 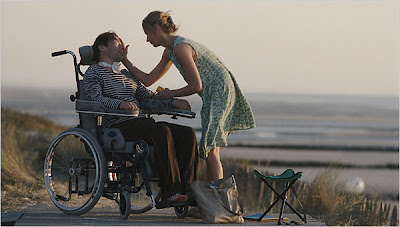 5. THE DIVING BELL AND THE BUTTERFLY
Painter-turned-director Julian Schnabel builds on the promise of BASQUIAT and the accomplishment of BEFORE NIGHT FALLS with his third feature, a real breakthrough of a film that alters our way of seeing. In adapting the memoir of Jean-Dominique Bauby, a French magazine editor who suffered a massive stroke and was left paralyzed except for one eyelid, Schnabel forges a whole universe as it might have appeared from such a limited perspective. Then, he gradually pulls back to reveal Bauby’s past and his present from our own perspective, and the juxtapositions are startling. Like the memoir, Schnabel succeeds in expressing how one can create great, transcendent art out of the most tragic circumstances and more importantly, suffuse a life with it. 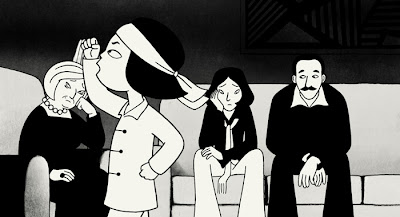 6. PERSEPOLIS
Marjane Satrapi's graphic memoirs of growing up in Iran during the Islamic Revolution wonderfully come to life in this droll, tender adaptation she co-directed with Vincent Paronnaud. Keeping in spirit with the books' minimalist, black-and-white tableau, the impressionist, handcrafted animation feels warm and reassuring in an age of too much CGI. Satrapi also confidently expresses so many nuances out of such a deliberately limited, carefully constructed palette. Told with sincerity, resourcefulness and humor, her story relates the painful love/hate relationship she develops with her beloved, complicated culture. Plus, she connects with us at an emotional level many live action coming-of-age films rarely approach. 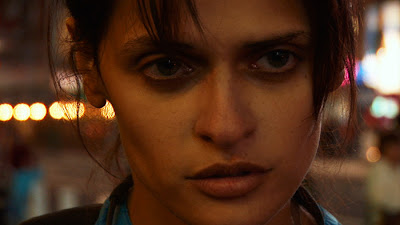 7. DAY NIGHT DAY NIGHT
Julia Loktev’s wrenching, absorbing effort follows an anonymous 19-year-old girl (Luisa Williams) of no discernable ethnic background as she rigorously trains to do something (to give away exactly what this is somewhat lessens the film’s impact). However, when the girl actually attempts to carry off that something and it doesn’t go as planned, she faces an array of complexities and consequences she hadn’t previously considered. Methodically paced and shot in a bare-bones style, the film ends up in a far different place (both literally and figuratively) than where it begins. And although the word “haunted” is much overused, I can’t think of a better way to describe the expression on Williams’ face at the inconclusive, lingering final shot. 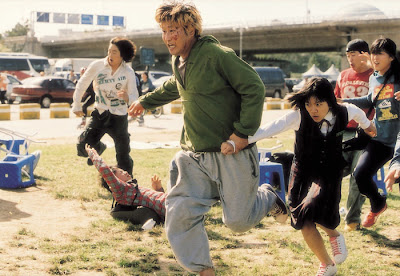 8. THE HOST
The world doesn’t need yet another monster movie. South Korean director Bong Joon-ho probably considered that when making this whip-smart takeoff which pays tribute to the genre while stretching it out a great deal, adding in slapstick, domestic drama, and more than a smidgen of satire, while not ignoring the horror of its creation. The cast is uniformly excellent, from Song Kang-ho as a snack-bar working slacker to Bae Doona as his sister, a professional archer. Carrying an infectiously gleeful anti-authoritarian undercurrent throughout, the film tries to be a little bit of everything to everyone, and amazingly, it succeeds. 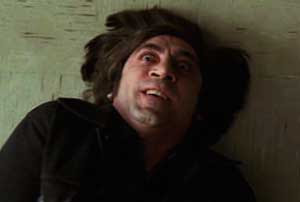 9. NO COUNTRY FOR OLD MEN
Oh, those Coen Brothers. Not only do they come back from the vagaries of THE LADYKILLERS and INTOLERABLE CRUELTY, but they make a film that rivals FARGO as their very best. Who knew they could obliterate the snarky tone and condescending attitude towards their characters (always their Achilles' heel) but keep everything else intact? Their Cormac McCarthy adaptation is both a sobering, economical thriller and a meditative, almost surreal study of violence, greed, stubbornness and consequence. Javier Bardem as Anton Chigurh is the premier nihilist villain of our time, so thank goodness that Tommy Lee Jones’ besieged sheriff eventually emerges as the film’s heart and soul. 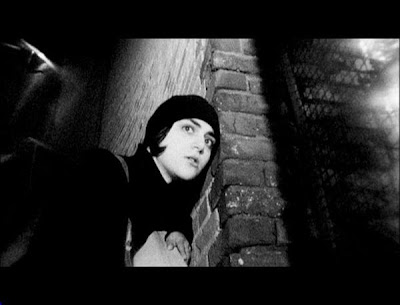 10. BRAND UPON THE BRAIN!
Since THE SADDEST MUSIC IN THE WORLD, it’s been a joy to watch Guy Maddin further develop and refine his demented, hallucinatory style. This one is typical Maddin madness: a fractured fairy tale about a marooned orphanage, a fountain of youth and gender-bending teens flies by in a blur of lurid intertitles and images that bleed into one another, all of it (sort of) held together by Isabella Rossellini’s priceless narration. But the director reaches a new apex of invention here, crafting a narrative ever more involving and accessible while remaining delightfully eccentric. He’s achieved a perfect balance that comes from concurrently pushing and pleasing his audience.
HONORABLE MENTIONS:
RATATOUILLE
Brad Bird’s masterful third feature not only wrings an excellent, affecting tale from an unlikely premise, but also speaks volumes about how talent and drive combine to make sublime art, and what the audience’s role is in consuming and comprehending it.

I DON’T WANT TO SLEEP ALONE
Like all his Taiwan-set works, Tsai Ming-Liang’s first film shot in his native Malaysia finds strange beauty and poetry in what to nearly anyone else would appear as a miserable, crumbling landscape.
THE LIVES OF OTHERS
Perhaps the most vivid study we’ve had of the Cold War and its personal implications from the other side. The late Ulrich Muhe gives this year’s most intense and least showy lead performance.

IN THE SHADOW OF THE MOON
The year’s most puzzling box-office flop, it artfully recounts the Apollo moon missions; the living histories its subjects provide make it a powerful, vital document.

JUNO
By gradually supplanting its twee, faux-hip dialogue and overload of attitude with actual compassion and wit (not to mention a superb ensemble cast), this deserved indie hit resonates more with each viewing.

CLIMATES
Nuri Bilge Ceylan probably isn’t the first filmmaker to equate a faltering relationship with a season cycle, but his languid pacing and creative yet unflashy visual sense and sound design have little precedent.

LARS AND THE REAL GIRL
This could have been a one-joke flick, so thank Ryan Gosling, Emily Mortimer, Patricia Clarkson and the rest of the cast for breathing life into the joke and making it seem not so ridiculous.

AUTISM THE MUSICAL
A true buried treasure, this provocative, exuberant doc debunks myths about a misunderstood disease by painting its subjects as real, complex individuals to respect as we would any other kids.

MONKEY WARFARE
An anarchic, razor-sharp Canadian comedy that strikes a faultless balance between idealism and pragmatism with irresistible, ramshackle charm.

AUDIENCE OF ONE
An ambitious but terribly incompetent Pentecostal minister attempts to make a science fiction film about the biblical story of Joseph in Michael Jacobs’ hilarious but fair, must-be-seen-to-be-believed documentary.

THE BANISHMENT
Still without US distribution, Andrey Zvyagintsev's follow-up to THE RETURN shows him continuing to enhance and perfect his inimitable style, aided by unforgettable images, strong performances and a cyclical, slightly more accessible narrative.

4 MONTHS, 3 WEEKS AND 2 DAYS
MY WINNIPEG
THE VISITOR
SILENT LIGHT
I'll write more about these as they hit theaters throughout 2008.

ALSO RECOMMENDED:
(I gave all these at least 4 out of 5 stars)

BROKEN ENGLISH
CONTROL
CRAZY LOVE
THE DARJEELING LIMITED
GREAT WORLD OF SOUND
HELVETICA
JOE STRUMMER: THE FUTURE IS UNWRITTEN
JONESTOWN: THE LIFE AND DEATH OF PEOPLE’S TEMPLE
KURT COBAIN: ABOUT A SON
LAKE OF FIRE
MARGOT AT THE WEDDING
NO END IN SIGHT
OFFSIDE
ONCE
PAN’S LABYRINTH
PAPRIKA
PROTAGONIST
THE SECRET LIFE OF WORDS
THE SIMPSONS MOVIE
SUMMERCAMP!
SUPERBAD
SWEENEY TODD
THIS IS ENGLAND
WHO THE $#%& IS JACKSON POLLOCK?
ZODIAC
Posted by C. Kriofske at 12:03 AM