FLIGHT OF THE RED BALLOON 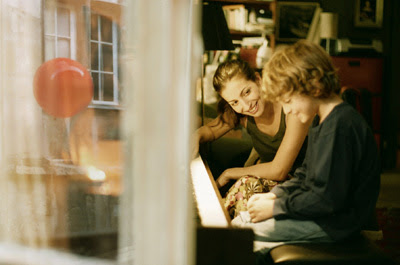 A few years back, Taiwanese director Hou Hsiao-Hsien traveled to Japan to make CAFÉ LUMIÈRE, a charming, languid tribute to one of that country's greatest filmmakers, Yasujiro Ozu. In this, his first non-Asian effort, he has crafted the earlier film's Western equivalent. Inspired by Albert Lamorisse's classic 1956 short THE RED BALLOON, Hou instinctively approaches Paris as a thoughtful tourist, though perhaps that term doesn't do him justice--he's more a seeker, freshly viewing France's day-to-day rhythms with the same sense of discovery as in his Japanese film.

One does not necessarily need to be familiar with Lamorisse's whimsical boy-and-his-balloon travelogue--it's merely a jumping off point for Hou. By way of a lost red balloon, we meet one of the three main characters, a young boy named Simon (Simon Iteanu), who is introduced standing outside a Metro station, looking upwards and begging the titular object (which slowly comes into our sight) to return. In contrast to Lamorisse's film, the boy never gets his balloon back, but it remains a constant, often ghostly presence as Hou intermittently, leisurely tracks its whereabouts: bobbing in and out of the Metro, floating past windows and skylights, and eventually gliding over the Parisian skyline.

The other two principal characters are Simon's frazzled mother, Suzanne (a terrific, bleach blonde Juliette Binoche), who makes her living narrating puppet shows, and the comparatively more serene Song (Song Fang), a Taiwanese film student (and sly stand-in for the director) whom Suzanne hires as her son's babysitter. Half the film is set in Suzanne's tiny, cramped apartment; the other follows Song and Simon as they stroll through Paris, the former making her own student film homage to THE RED BALLOON with her video camera. Not much else happens, apart from a trip out of town to meet with a legendary Asian puppeteer and Suzanne's squabbles with her tenants, and those incidents feel vestigial at best.

As always, Hou is more concerned with emphasizing textures: the glow of a hidden side street, the way a gorgeous, melancholy reoccurring piano theme casts shadows over sidewalks and parks, and most spectacularly, the title-referencing motifs that subtly surface throughout, from a simple red handbag to the soft, pink glow emanating from an overhead lamp to even Simon's head of curly red locks. This is Hou is at his most inviting, engaging and poetic and I hope he considers filming something similar in America--maybe he'll have a better go at it than Wong Kar Wai recently has.
Posted by C. Kriofske at 8:48 PM