Yes, the year is correct. As I begin compiling my end-of-the-decade lists (you’ve been warned), you may notice that on the sidebar, my yearly lists for film and music only go back to 2002, for that’s when I began blogging. Completist that I am, I feel the need to post my top ten films of this decade’s first two years (I haven’t decided whether to do music yet). First up, 2001.

More than a few critics deem 1939 the greatest year ever for movies (THE WIZARD OF OZ, GONE WITH THE WIND, etc;), while at least one has stumped for 1999, the year of AMERICAN BEAUTY, MAGNOLIA, BOYS DON’T CRY and many other notable efforts (BEING JOHN MALKOVICH was my # 1 at the time, although now I would say ELECTION without hesitation).

For me, 2001 is almost implausibly stellar. I feel as strongly about every title in my current top ten of that year (as opposed to my original list, which I’ll reveal at the end) as I do about most of my number one films of any other year this decade. I’m not sure how to account for this. Before I argue how these films were born out of a creatively stimulating environment that no longer exists, may I remind you that 2001 produced a lot of dreck as well, from Tim Burton’s pointless remake of PLANET OF THE APES to stiflingly disastrous indies such as NOVOCAINE. So, call it serendipitous that a single year produced such a bounty of cinematic riches—keep your fingers crossed that it will happen again soon. (As always, I go by U.S. release dates in determining what year a film belongs to). 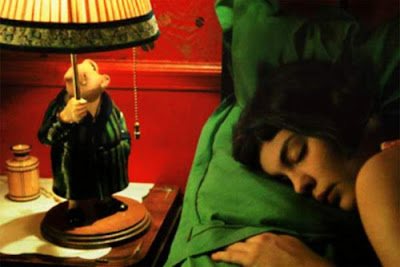 10. AMELIE
Jean-Pierre Jeunet’s iconic baguette of a romantic comedy nearly defies logic. The cynic in me sees it as an overly precious slice of calculated whimsy and wishes it had an actress with more depth and presence than title star Audrey Tautou. And yet, every time I watch the film, I melt like our heroine literally does in one scene. The narration, the set design and especially the score are inventive and divine. In the end, I suppose the whole thing radiates enough pure, unfiltered joy to obliterate all of my cynicism. 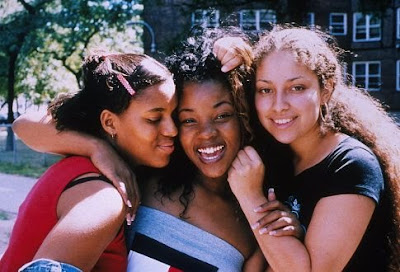 9. OUR SONG
Easily the most obscure film on this list, this quiet gem from writer/director Jim McKay follows three teenage girls (one of them a young, robust Kerry Washington) over the course of one summer in Brooklyn. What impresses me most about this coming of age tale is its genuineness: rarely does a work of fiction so effortlessly simulate the day to day rhythms of real life to the point where viewers feel as if they are eavesdropping in on the characters rather than watching performances. 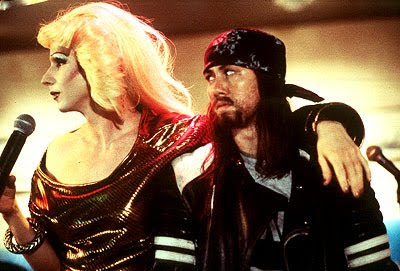 8. HEDWIG AND THE ANGRY INCH
John Cameron Mitchell’s adaptation of his own theatrical piece about a sort-of transgender glam rocker boasts a unique searching-for-an-identity concept that transcends its Rocky Horror influence, terrific songs that, for once in a musical, genuinely rock, and an instantly winning, handmade, off-the-cuff feel. However, it’s Mitchell himself that gives the film its spark—his Hedwig is such an arresting and sincere persona that the character’s underdog status takes on an intense poignancy amidst all the fabulousness. 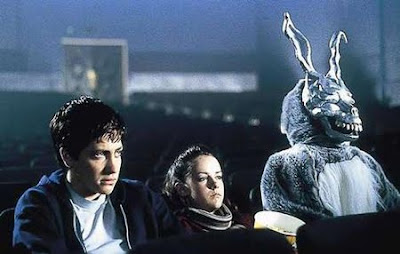 7. DONNIE DARKO
Perhaps the decade’s premier cult flick, and the one that seems to exist most defiantly in its own world—just try to describe it to someone who hasn’t seen it in twenty words or less. “Disturbed teenager discovers means of time travel while a giant rabbit forces him to do bad things” is the best I can come up with, and even that doesn’t begin to explain this perverse John Hughes tribute. Overly ambitious and a little obtuse, it’s nonetheless a true original, casting an eerie, unshakable spell like no film before or arguably since. 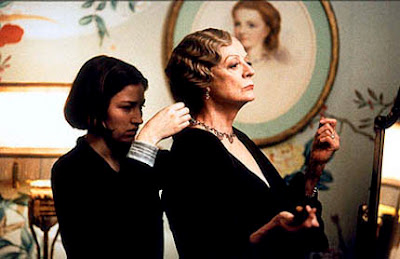 6. GOSFORD PARK
Robert Altman doing an upstairs/downstairs British period mystery? It seems as absurd as a 1970s update of Phillip Marlowe, or a live-action version of an outrageously silly comic strip/cartoon. Altman tried everything and left his discernible stamp on it (to varying degrees of success), but this was his best effort since NASHVILLE, with which it shared a massive, mostly great ensemble delineated by class, and a murder. But he just about glosses over the latter and focuses almost entirely on the subtleties inherent in the former, and it’s a rich, witty, revealing take on an awfully particular culture. 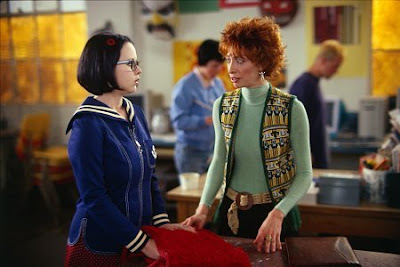 5. GHOST WORLD
Speaking of comic book adaptations: this starts off like the ultimate ‘90s Tarantino-inspired remnant of indie irony: two teenagers (a never-better Thora Birch and a young, astute Scarlett Johansson) live to mock and defile the mass-market suburban humdrum around them by celebrating that which “is so bad it’s gone past good back to bad again.” Fortunately, director Terry Zwigoff doesn’t let his heroines (or the audience) get off so easily. By adding an inspired third character (Steve Buscemi at his very best) to the story, he allows them to consider a depth of emotion outside the film’s ticky-tacky surface, and the end result absolutely nails the uncertainty and fear of becoming a grown up. 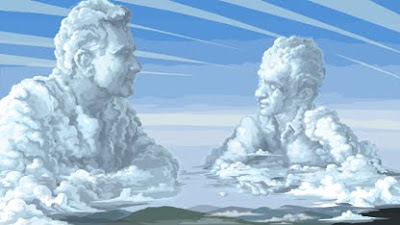 4. WAKING LIFE
Another director who is game for just about anything, Richard Linklater is at his best when he’s at his most personal; this seemingly free-form, literally floating (via rotoscope animation) dip into blather about dreams and ideas seems exceptionally personal, but feels like an inspired dialogue, as many contribute to its ideas and design (it employs over twenty animators on a scene-by-scene basis). In addition to looking like nothing else that preceded it, WAKING LIFE also had its own unique, peculiar rhythm—it was one of the few films released in the weeks after 9/11 that wholeheartedly encouraged its viewers to sit down and think about the world around and beyond them. 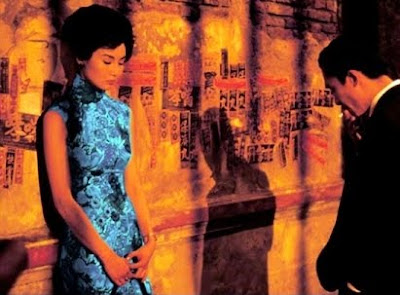 3. IN THE MOOD FOR LOVE
Some filmmakers arrive with a fully-formed vision (see # 7) that they can neither top nor sustain; others cultivate one gradually until it eventually blossoms at its fullest extent. Wong Kar Wai is the best director in the latter category I can think of. This film beautifully amalgamates all of his obsessions (American pop music, tactile sensuousness, romantic longing, the opportunity and folly of coincidence) into a stunning whole. A deceptively simple tale of a romance that’s never acted upon, it sounds like the stuff of a prime Douglas Sirk melodrama. Instead, it plays out with such nuance and restraint that it achieves an almost unbearable intimacy, leaving the viewer insatiably swooned and utterly devastated. 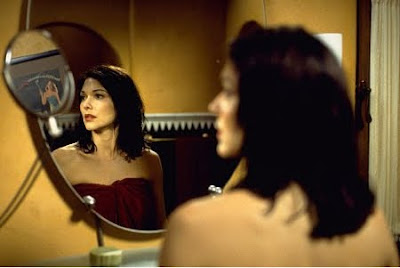 2. MULHOLLAND DR.
I wasn’t much of a Lynch-head before seeing this exquisite and weirdly emotional mindfuck of a feature, which was constructed from scraps of a rejected television series pilot. I still find it hard to explain why I get goose bumps just hearing the opening swing-band theme music as the image blurs and skitters across the screen. I can’t even fully decipher the narrative’s warped logic, although over several viewings I’ve come up with a few ambitious, probably insufficient theories. But oh, how easily Lynch seduces me—with Los Angeles as his medium, he fearlessly explores connections between dreams, reality and the movies, not to mention all of the wicked, sublime and terrifying possibilities that surface when they overlap. 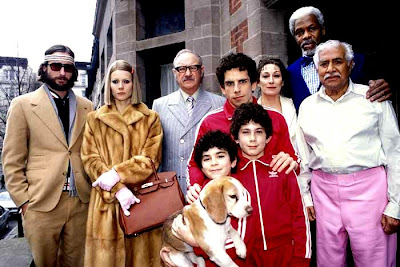 1. THE ROYAL TENENBAUMS
To explain my enduring love for Wes Anderson’s familial saga, I go back to the notion that with each viewing, I take away more from it. Visually, that’s not much of a challenge for anyone, for the director jam packs each intricate frame and dizzying montage with an insane attention-to-detail that bespeaks a lot of excitement and real affection for this universe he’s created. For some, it’s harder to locate that growing emotional charge on subsequent viewings or even one to begin with. While not denying that Anderson’s whimsy is an acquired taste, I will strongly champion the carefulness with which he develops his characters (okay, maybe 'cept for Dudley)—always in stock uniform, they may appear like comic strip denizens, but they’re also as unexpectedly complicated and enchantingly flawed as most people you know.

Just for fun, here was my original top ten:

I had seen DONNIE DARKO but was still processing it. As for AMELIE, I was grappling with the issues I mentioned above. I was easily impressed by the performances in IN THE BEDROOM at the time, though now I suspect that's all there is to the film. Repeated viewings of the Lynch and Anderson films, of course, escalated my opinions of them over the years. And what about MEMENTO, this year's (and possibly this decade's) greatest casualty? I've had little desire to return to it since 2002, and I fear it wouldn't stack up to these other films today. Perhaps before the decade is over, I'll view it again to make sure.
Posted by C. Kriofske at 10:36 PM

Oh, that was a good year, wasn't it? They don't make 'em like that anymore.

But I think you should give In the Bedroom another chance. I think the screenplay and direction play a major role in telling the story without a whole lot of direct dialogue.

Oh, I think I would still love IN THE BEDROOM; it's just not a film I could watch over and over again like most others on this list.