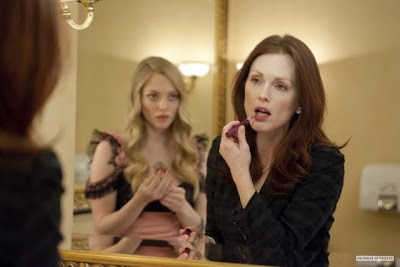 Atom Egoyan's latest opens with Catherine (Julianne Moore), a gynecologist, describing an orgasm to her patient while practically draining all the life out of one (to her, it’s simply a “series of muscular contractions”). Soon after, her professor husband David (Liam Neeson) appears as an impossibly irresistible object of desire to his female students during one of his lectures. Both scenes felt exaggerated to a point that when the couple’s fidelity problems came to the fore as they tooled around their ostentatiously ultra-modern home, I was left wondering why I should care about them.

Thank goodness that Catherine meets Chloe (Amanda Seyfried), a high class prostitute half her age in a restaurant ladies’ room. Suspecting (with good reason) that David is cheating on her, Catherine hires Chloe to approach him in a café he frequents, flirt with him, and see what happens. When Chloe reports the results to Catherine, she is understandably hesitant to hear what has transpired between this girl and her husband, but voyeurism gradually gets the best of her. She probes Chloe for more details, and asks her to meet with David a second time. Soon, Catherine is living vicariously through Chloe, almost receiving an erotic charge by osmosis as she listens to her describe sexual acts with David with an intensity that eventually proves fatal for one of the two women.

Working for the first time with another person’s screenplay (SECRETARY scribe Erin Cressida Wilson), Egoyan directs far less cerebrally (and somewhat less elliptically) than usual, although his landscapes (in this case, Toronto’s posh Yorkville neighborhood) are as visually seductive as ever. It all threatens to turn into the lurid, sexual melodrama past works such as EXOTICA only slyly skirted around the edges of, but a neat, late twist elevates it considerably from your usual FATAL ATTRACTION-derived trash. Moore brings a visceral depth to Catherine, just barely keeping in control as the world crashes around her. Seyfried both serves as a worthy foil and a believable confidante, her expressive eyes (and lips!) providing a revealing counterpoint to her words. CHLOE is not great cinema like THE SWEET HEREAFTER (the impossibly high standard I’ve held Egoyan to ever since he made it), but at least he’s made a thoughtful erotic thriller and not another empty one—at times, it’s also good campy fun.
Posted by C. Kriofske at 8:59 PM