I've been itching to write about these two films together because of the obvious hook it provides, but apart from that, they don't have much in common. Read to find out which one's superior: the Cannes Camera d'or winner or the Cannes Grand Prix winner. 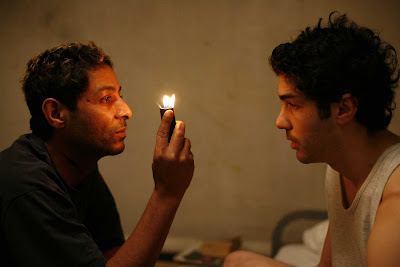 One supposes that the ideal purpose of going to prison is rehabilitation. Malik (Tahar Rahim), the young Arabic protagonist of A PROPHET, Jacques Audiard's meditative, sometimes mesmerizing prison drama certainly betters himself during a six-year stint serving time for a crime never alluded to, although it would be a stretch to say he's rehabilitated to a morally good end. Early on during his sentence, he's immediately chosen as a pawn by fellow inmate Cesar (Niels Arustrup), an older Corsican crime boss. He offers Malik "protection" in exchange for a horrific favor but basically threatens him into it. Malik deals with the guilt of this deed and his subservience to Cesar while slowly ascending through the prison's hierarchy. He eventually gains power via some illicit side business at odds with Cesar's interests.

Tempering a no-nonsense, documentary-like style with occasional scenes of magic realism and lyrical uplift, Audiard's film remains engrossing and well-paced throughout its 150+ minute run. Rahim and Arustrup are both excellent as, respectively, a young petty thief often in way over his head and the wizened but volatile monster passive-aggressively molding his protégé. Unfortunately, for all of Audiard's assured direction, something key is missing at the end. We're left wondering what exactly Malik has taken away from his prison term, and whether he is worthy of his fate. I wanted to appreciate this ambiguity Audiard leaves us with, but I also wanted to know whether he thought prison had an altogether helpful or hurtful effect on Malik's life. Given a week to mull over this, I'm still not certain. 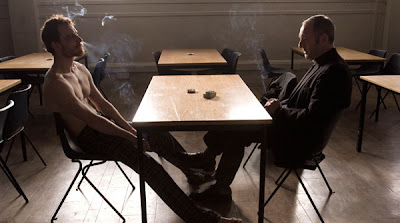 HUNGER depicts the fatal 1981 strike conducted in Belfast, Ireland by Bobby Sands (Michael Fassbender, absolutely magnetic but plausible) and his fellow IRA inmates. For these men, the idea of prison as rehabilitation is completely irrelevant. Jailed primarily for political rather than criminal acts, neither they nor the audience are ever under any pretense that imprisonment will alter their beliefs. The English government sees them as pests one can control but not exterminate, so they respond via an extreme means of protest—first, by not washing (covering their cell walls with their own feces and simultaneously pouring chamber pots under their doors into the corridor, creating a surreal urine river of sorts) and then by not eating.

In his impressive first feature, director Steve McQueen (a visual artist, obviously not the long-dead iconic actor) goes to great lengths for his audience to really feel the shit and piss that dominates the film’s first half, but he does so with such unexpected, understated grace. Employing tight close-ups, precious little music or dialogue, lighting as the focal point and a subtle, nearly dreamlike pace (even the sudden dark-to-light contrasts never overwhelm or disengage), McQueen constructs an uncommonly personal biopic of Sands. Midway through, as a bridge between the film’s two acts of protest, he temporarily breaks the silence with a ten minute dialogue between Sands and a priest. This simple, beautiful sequence effectively outlines why the hunger strike must occur and why it will render Sands more than a mere martyr. Presented in a lengthy two-shot without an edit before separating the two men in a series of back-and-forth cuts, it provides all of the context and rationale any viewer will need. Since imprisonment offers no rewards in this case, we see and fully understand how only sacrificial protest can hope to bring about the greater good.
Posted by C. Kriofske at 9:34 PM