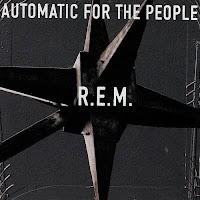 In 2004, when I blogged my 100 all-time favorite albums, Automatic For the People was number one. I didn’t spent too much time deliberating—it was one of two records (the other was Abbey Road) that changed my life (or at least profoundly impacted my musical taste) when it came out during my senior year of high school in October 1992.

As I arranged this ‘90s list, I was initially determined not to have Automatic at the top. Over the past few years, I’ve grown a little wary of this album, partially because it takes me back to my 18-year-old self—a period I have some fond memories of but would never, ever want to re-live—but mostly due to having heard it too many damn times. Oddly enough, Automatic was one of those records that took a few spins for me to fully appreciate; once it clicked, I found more to love in its complexities and nuances on subsequent listens. However, after well over a decade, I knew the record too well, and its magic faded somewhat. I dutifully still played it at least annually (usually in autumn, for reasons I’ll get into later), but whether it’s still my all-time favorite album is up for debate.

I went through phases where Apartment Life would have been number one here. It’s another record I’ve called my all-time favorite, an album that for me fits any mood or occasion. I also considered placing If You’re Feeling Sinister at the top, because it continues to age so well and still sounds extraordinarily unique, as if it could have come from nowhere else. In the end, though, I knew in my heart that I’d be putting up a front or trying to appear hip or cool (or obscure) if I didn’t place Automatic above those other two entries. Simply put, every time I hear it, it still carries an emotional charge like very few other records I’ve heard.

Wrapping themes of mortality and loss into moody, not obviously radio friendly music, it scans as an intensely personal record, so how did it strike such a chord among the masses? Although it didn’t top the Billboard Album charts (sequestered at # 2 by Garth Brooks!) or include any huge radio hits (like “Stand” and “Losing My Religion” from the band’s previous two albums), Automatic sold four million copies in this country alone. Furthermore, it’s inarguably a classic of its era that has also transcended said era—nothing about it screams 1992 and, except for the political screed “Ignoreland”, none of the lyrics explicitly reference a particular time. (“Monty Got a Raw Deal” and “Man on the Moon” focus on deceased real-life celebrities, but view them philosophically rather than as biography, nearly awarding them mythical status).

Before Automatic, I admired R.E.M. at a distance, enjoying their radio hits but not rushing out to gobble up their back catalogue. Then, a week before the album came out, I heard its lead single “Drive” on the radio and took notice—something about that minor-key guitar arpeggio and the song’s fluid, dynamic shifts from urgent, stripped-down acoustic splendor to charged electricity and back again startled me. I bought the album days after its release, listened to it on shuffle a few times (as was my peculiar ritual at the time—I got my first CD player earlier that year, so the ability to shuffle tracks still held that novelty for me), liked some songs more than others (“Everybody Hurts”, in which vocalist Michael Stipe talks a friend out of committing suicide immediately stood out) and that was that.

A week or two later, sprawled out on my bed one Friday evening, I listened to the album (perhaps in order!) and when the Andy Kaufman tribute “Man on the Moon” came on, I suddenly felt the music’s pull—in particular, its outgoing, sing-along melody, cathedral-like expansiveness and tremendous warmth. Soon, other songs similarly resonated: “Sweetness Follows” applying a soothing balm to death’s pain, “Nightswimming” capturing the melancholy glow of a faint but significant reminiscence, “Try Not to Breathe” casting a light unto the darkness with its sway and verve, “Find the River” providing a lovely conclusion with wisdom and grace.

Automatic’s fixation on memory and loss and its pastoral, acoustic folk hues forever link it with autumn in my mind; of course, first hearing it during that season also factors in. I now occasionally skip over “Everybody Hurts”—I still love the song but its intensity is sometimes too much for me to bear. I’ve never felt suicidal (nor had a close friend who has), but the song just slays me for how emotionally naked it is. This urgency and willingness to go out on a limb and open yourself up to the rest of the world reaches its peak here, but you can feel it throughout the album. The fact that millions of other people felt it too lends Automatic a sense of awe rare for any album.
Posted by C. Kriofske at 9:25 PM

Funny, Cameron & I were just tonight discussing our favorite R.E.M. album and this was mine. Excellent choice.