Time for another Chlotrudis poll: following favorite horror, foreign language, and arty films (see LISTS to the right), this year it’s documentaries. And my top twenty are… 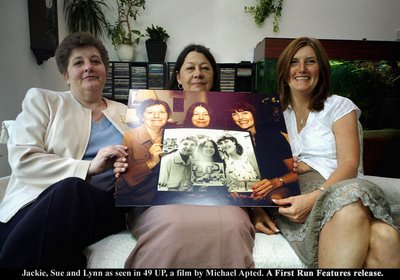 When I started thinking about this list over a month ago, I knew right away what would be number one. Michael Apted’s conceptually brilliant project tracks the lives of dozen subjects born in the UK in 1956 by interviewing them once every seven years. It was originally conceived as 7 UP, a one-time television show about a selection of seven year-olds culled from different classes and cultures. With each installment (7 + SEVEN, 21, 28 UP, 35 UP, 42 UP, and 49 UP), we flash back between the past(s) and the present, literally seeing these people age and evolve before our very eyes. I’ve only viewed the three most recent films, but I don’t think you need to see them all to comprehend what an immense achievement the whole is. Currently an unfinished but rich and revelatory symphony, like the best docs, it encourages us to examine these lives and hold them up as mirrors to our own.

Nearly 70% of the remaining films come from the past decade, which is apt since I wasn’t much of an active cineaste before then. It isn’t an exaggeration to say that documentaries have also enjoyed a spike in popularity and quantity since then. Credit breakout hits like the work of Michael Moore or Errol Morris (though # 15 is probably still the latter’s least-seen, most cultish feature), but also acknowledge the advent of digital video. Either way, since I began making year-end top ten lists in 2000, I’ve made room for at least one doc just about every time, from Jonathan Caouette’s non-paralleled autobiographical collage to Jeffrey Blitz’s cross-section of American pre-teens sifted through the lens of a very particular talent.

Of course there are also classics of the genre: the Maysles Brothers’ unforgettable portrait of forgotten lives whiling away in a decaying mansion, Ross McElwee’s groundbreaking personal essay/travelogue, Barbara Kopple’s depiction of an isolated community and its struggles to be seen, heard and understood. I could rattle off another twenty worthy candidates, from the Soviet silent-era MAN WITH A MOVIE CAMERA to the contemporary Cameroon judicial system of SISTERS IN LAW. The films that made the cut, however, did so because each one compels and entertains as much as it informs and represents.
Posted by C. Kriofske at 7:05 PM