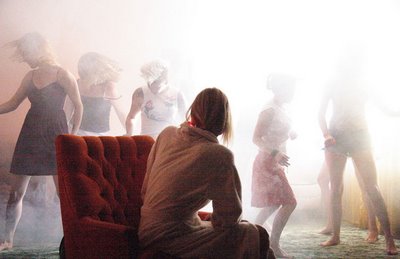 Instead of filming a completed screenplay, David Lynch took a piecemeal approach to making INLAND EMPIRE: encouraged by the physical freedom a toy-sized digital video camera allows, he would think of an idea, write it down, and then immediately film it, letting the story develop with each individual fragment or improvisation. It's essential to consider and understand this means of composition when approaching the finished work, and irrelevant to dismiss it for not making sense. This is an avant-garde film that favors texture and feeling over logic or linearity. The director's most experimental effort since ERASERHEAD, it's a challenging ride, but one worth taking.

Most of it centers on Nikki (Laura Dern), a Hollywood actress starring in a remake of a film whose original version was never completed because the leads died of mysterious circumstances while filming. Many early scenes revolve around Nikki, her co-star Devon (Justin Theroux) and their director Kingsley (Jeremy Irons) as the shoot begins. However, it's not long before Nikki becomes unable to differentiate between herself and her character. From there, it's a slow glide through Lynch's rabbit hole: we see Dern as Nikki but also as a housewife in a mid-20th century tract home and an Aileen Wuornos-like figure in a dingy interrogation chamber where she confesses lurid incidents to a silent bespectacled man. We also see strange, enigmatic sequences shot in the snowy, industrial Polish city of Lodz, snatches of an eerie nuclear family sitcom (complete with laugh track) populated by a cast wearing, well, rabbit suits, plus dancing whores and Laura Palmer's mother, too!

As a long-awaited follow-up to the monumental MULHOLLAND DRIVE, this is not exactly a retread, although it's hard to imagine it existing without its predecessor. Those infuriated by MULHOLLAND'S fascinating final third will probably be annoyed that this one plays like a three-hour extension of its dream logic and shifting personalities. But where that film focused on a dreamer slowly awakening into consciousness before succumbing to encroaching insanity, this one explores more in-depth how a persona gradually shatters and dissolves, its world becoming ever more abstract, with layers of recurring motifs piling up until they resemble something close to madness.

Although this film lacks some of its predecessor's tenderness, it retains its adventurous, twisted spirit. Few directors can still match Lynch in terms of gorgeously sinister imagery, elaborate sound design, and utter originality (and creepiness). An actress I've always admired, Dern is just phenomenal here; she's bravely willing to reach out to the furthest possible limb to display a complexity of emotions, from amiable and heroine-like to frightening and downright ugly. Towards the film's ethereal, almost rapturous conclusion, Lynch temporarily pulls the rug out from under us, offering a fleeting explanation for what we've seen, only to pull back again and offer more reasons to doubt that one exists. INLAND EMPIRE can be frustrating for sure, but Lynch's openness and seemingly endless creativity makes for one compelling experiment and experience.
Posted by C. Kriofske at 10:20 PM