I’ve been trying to cram in as many 2006 films as I can before Chlotrudis Award nominations are due. Here’s everything I’ve seen since the first of the month, including my first film of 2007. 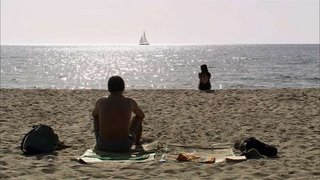 I admit to nodding off during Turkish director Nuri Bilge Ceylan’s last film, DISTANT. I came close to doing so again during his new one—the languid, lulling pace is probably to blame—but I enjoyed it a great deal more. It opens with Asi and Bahar, a couple (played respectively by Ceylan and his wife, Ebru) vacationing in a coastal part of Turkey during the summer; it concludes with them saying goodbye (possibly for the final time) in a mountainous part of the country in winter. In between those two cyclical extremes, we witness the dissolution of their relationship. This includes not only their breakup, but smaller, far subtler details like the change in emotion and altered chemistry when they fleetingly reunite towards the end.

As a director, Ceylan’s visual sense is extraordinary yet unflashy, giving both pretty and banal images equal weight and depth. The sound design is also exceptional: you will never again hear the crack of a pine nut being eaten without thinking of this film’s most thrilling, surprising, sexually charged scene. What really gives CLIMATES an edge, however, is the director’s empathy towards his characters, no matter how poorly or erratically they sometimes behave. As a real couple portraying a fictional one, Ceylan and his wife are convincing without making the viewer feel too voyeuristic. And as for that languid pacing, Ceylan shrewdly throws enough abrupt, interesting twists into his narrative to keep it involving while remaining artful and contemplative. Grade: A-

Andre Techine’s latest reunites Catharine Deneuve and Gerard Depardieu as once-lovers who meet up after three decades apart. Actually, Depardieu’s never gotten over Deneuve, so he rashly, passionately pursues her in Tangiers, where she now lives with her younger husband, played by a potent Gilbert Melki. The two leads are as compatible ever, but Techine fleshes out this simple story with a subplot about Deneuve’s son, his girlfriend and the girlfriend’s twin sister (both played by the talented Lubna Azabal). It doesn’t necessarily echo the primary story, but it contributes to a study of human relationships nearly as thoughtful and nuanced as the one other Techine film I’ve seen, the great WILD REEDS. Grade: A-

THE OH IN OHIO

Stars a rarely-better Parker Posey as a Cleveland ad exec who has never had an orgasm, ever. A thin premise and somewhat clumsy script are enlivened by a decent cast: Paul Rudd (shlubby and nearly unrecognizable with copious facial hair) as her frustrated high school biology teacher husband, Mischa Barton as his precocious, seductive student (well-cast though her acting’s still shaky) and Danny DeVito as an unexpectedly charming swimming pool mogul. Plus a cameo from Liza Minnelli (it’s too much fun to give away what she’s doing here). This is a good vehicle for the oft-misused Posey; once you get past its silliness and first-time-filmmaker discrepancies, it’s refreshingly sweet and likable, if still slight. Grade: B-

Laurent Cantet follows up his intriguing, sparse film TIME OUT with something a little different: an adaptation of a series of short stories about middle-aged American women vacationing at the Haitian resort in the late 1970s. The main attraction is not the sea or the sun but the sex, primarily with young unemployed Haitian men. Charlotte Rampling continues an impressive recent run of performances here as the domineering Ellen, while Karen Young is nearly as good as her more idealistic rival Brenda. Cantet adequately scrutinizes the cultural politics of the region and time, but the most effective moments come from confessional first-person monologues for most of the characters. Spliced into the film, they’re an arresting counterpoint to the main flow of action. Grade: B+

THE DEATH OF MR. LAZARESCU

The most critically acclaimed film of the year is a 150-minute tale of a Romanian man slowly dying as he’s shuffled through the country’s monstrously bureaucratic health care system. You can see why it sat on my shelf for nearly three months before I got around to watching it. I can see the film’s allure, though I’m sorry to say the critics have overrated it somewhat. I would’ve shaved off most of the first 45 minutes which consist of the title character in his apartment, getting sick, waiting, waiting, waiting for an ambulance. The film takes off once he’s on his way to the first of many hospitals, aided by a dedicated, if not entirely sympathetic nurse (the superb Luminita Gheorghiu). Like a Bresson film but with exceedingly dark, satirical humor, LAZARESCU is a telling, biting critique, but it could've been tighter. Grade: B
Posted by C. Kriofske at 7:10 PM