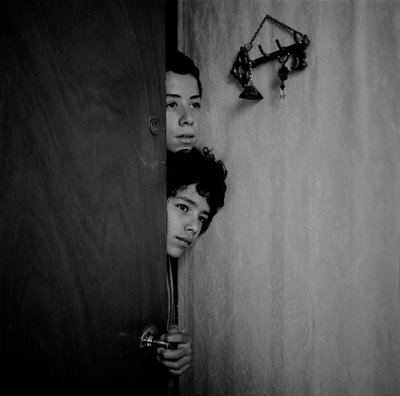 1. DUCK SEASON
In this minimalist black-and-white gem from Mexico, two fourteen-year-old boys have an apartment to themselves on a Sunday afternoon. They spend the day playing video games, drinking Cokes and ordering out for pizza, and are soon joined by an older female neighbor and a hapless delivery man. Then, the power goes out and they’re left to find other ways to pass the time. The narrative may sound slight, but director/screenwriter Fernando Eimbcke fully develops and endears these four characters to us to the point where we just don’t want to leave them behind. In fact, the beauty here lies in what the characters themselves have to regrettably leave behind (and what one of them claims for himself). Nearly ten months since I first saw it, DUCK SEASON still reminds me why I value tiny, little-seen independent films so much. 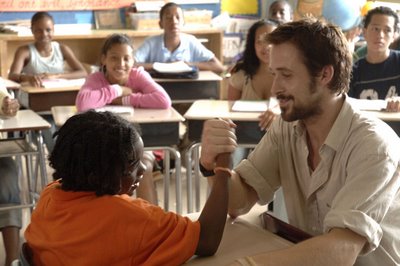 2. HALF NELSON
How do you make a film about a white Brooklyn junior high school teacher struggling with drug addiction without alienating your audience? How do you depict that teacher as a genuine mentor to one his black female students without your premise becoming a sentimental, falsely inspirational tale like DANGEROUS MINDS? Director Ryan Fleck and his co-screenwriter/producer Anna Boden manage to do both in this masterful, audacious feature: they take the frustration of the age and transform it into a poetic, unflinching study of how we live with it, and how we can find redemption through the support of others. Ryan Gosling and Anthony Mackie both give remarkably nuanced, career-best performances, while impressive young newcomer Shareeka Epps shows no sweat in matching them. 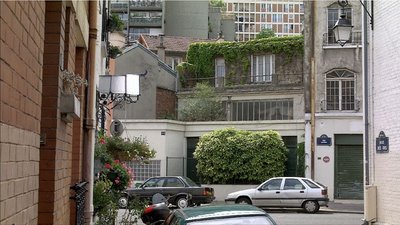 3. CACHE
I left the theater baffled and speechless but nonetheless intrigued when I first saw this in Toronto in 2005. On a second viewing in Boston this past January, I got it. At first, director Michael Haneke’s film is a portrait of a smug bourgeois couple (Daniel Auteuil and Juliet Binoche) being watched by an unknown assailant. They receive cryptic letters and videotaped stalker footage of their apartment in the mail, but as Auteuil’s character gradually becomes unhinged, the film reveals itself as an allegory about social responsibility and guilt. With its suspenseful pacing and occasionally shocking developments (both times I saw this in a theatre, I’ve never heard an entire audience gasp so loudly), CACHE is a thriller in every sense of the word. 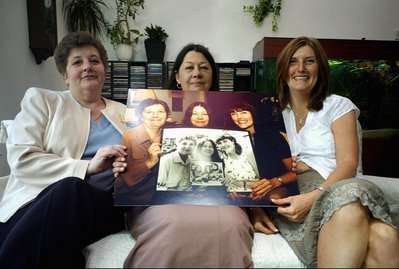 4. 49 UP
Last month, I named The “Up” Series my favorite documentary of all time, and this latest installment had a lot to do with that decision. Helmed by director Michael Apted, the series interviews the same group of about a dozen citizens originally from the UK every seven years. At the age of 49, we’re really starting to understand the philosophical implications and psychological effects these subjects experience by having their lives put on display. As usual, Apted alternates between the present and flashbacks of earlier installments, only the cumulative pull is now richer and more profound. If there’s any proof that this is so much more than an experiment, it’s in Jackie’s outburst when she startlingly confronts Apted about his interviewing methods. 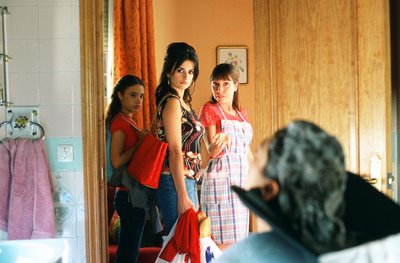 5. VOLVER
What an appropriate title: this is a glorious return to form for Pedro Almodovar after the accomplished but curiously remote BAD EDUCATION. A vivacious and unexpectedly multifaceted Penelope Cruz heads an excellent female ensemble cast; other standouts include the marvelously expressive Lola Duenas and the great Carmen Maura, working with the director on what could be his best picture since her last one with him, 1988’s WOMEN ON THE VERGE OF A NERVOUS BREAKDOWN. It’s as graceful as the powerful, meditative shots of rotating windmills that appear throughout, but just as lively and hilarious, tempering the melodrama of his mature period with sharp, rapid-fire dialogue. 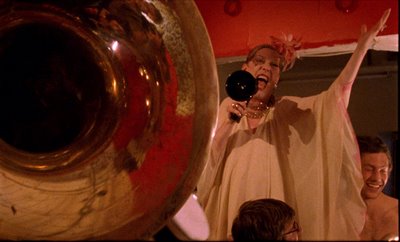 6. SHORTBUS
The cast is inconsistent, a few of the actors are a little too attractive, and the various narrative strands wrap up all too neatly. And none of that matters because John Cameron Mitchell’s second film has a sweet, beaming heart and a novel sense of camaraderie that transcends those minor annoyances. SHORTBUS is a romantic comedy like any of the best, only with graphic sex and money shots. As in HEDWIG AND THE ANGRY INCH, Mitchell gives an emphatic voice to the underground—the gays, freaks, weirdoes and eccentrics—and to a real post-9/11 New York. More importantly, he takes a misunderstood subject often depicted as taboo and simply celebrates it for what it is. 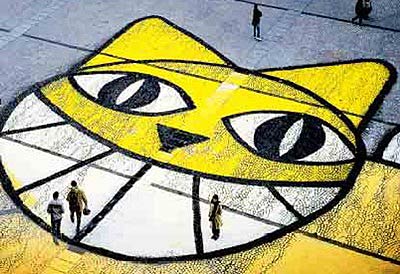 7. THE CASE OF THE GRINNING CAT
As for post-9/11 France, who better to document the country’s social climate than the venerable Chris Marker? Similar to the personal tone and whimsical spirit of Agnes Varda’s THE GLEANERS AND I, this utilizes the sudden appearance of a graffiti Cheshire cat on a slew of Parisian buildings and public spaces as a jumping-off point. From there, Marker intelligently muses on everything from homeland security and AIDS to France’s minority groups and the country’s 2002 presidential election. Lithe yet sustaining, this could be a delightful capper to the director’s vast oeuvre—it’s already one of the quintessential cinematic essays. 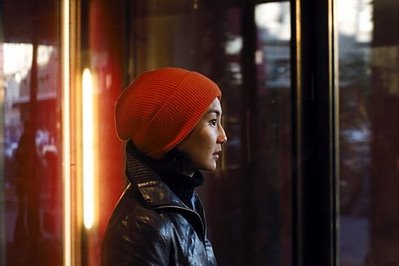 8. CLEAN
Its impact has diminished somewhat since I first saw it two summers ago, but Olivier Assayas’ film (belatedly released in the U.S.) still holds up—as a choice vehicle for the director’s ex-wife Maggie Cheung, and as an uncommonly insightful and realistic study of drug addiction and recovery. In a gentle supporting role, Nick Nolte does some of his best work ever, while Assayas constructs an arresting visual tableau of glowing oil refineries and claustrophobic Parisian streets. The rare film that doesn’t demean or punish its junkie protagonist, CLEAN is a delicately executed drama, a breath of fresh air. 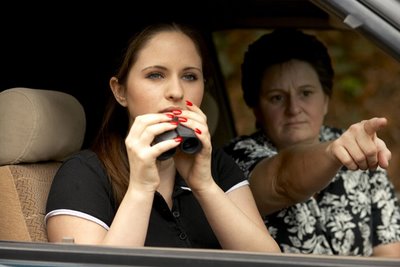 9. THIS FILM IS NOT YET RATED
To criticize documentary filmmaker Kirby Dick for being self-indulgent is to entirely miss the point of his entertaining, scathing expose of the MPAA, which is to show how unfair and ethically bankrupt the agency is, particularly toward independent filmmakers. Structured like a Michael Moore piece (but without the patronizing tone), Dick uses the usual graphics, found footage and talking heads interviews to give us an enlightening, detailed history of film censorship in America, and that's fine. However, what really sets it apart is his employment of a detective to find out how this secretive watchdog group works (not to mention just who its members are). The provocative results may raise any rational viewer's blood pressure. 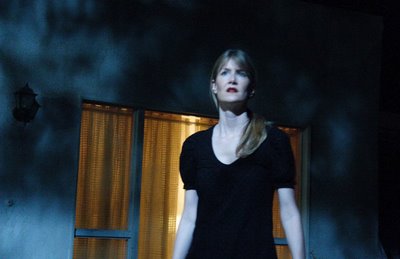 10. INLAND EMPIRE
I nearly considered making this a tie with CHILDREN OF MEN, but where Alfonso Cuaron's equally (albeit much different) visionary fable gets a little goopy in the end, this one's almost rapturous conclusion approaches the ethereal and the divine. Lynch's three-hour avant-garde digital video mindfuck is a deserved, dazzling showcase for Laura Dern (and her multiple onscreen personalities) but also probably his most ambitious, farthest-reaching plunge into the unknown. Not yet nearly as resonant (or comprehensible) as MULHOLLAND DRIVE, I remain utterly bewitched by it.

CHILDREN OF MEN
Both a visual and conceptual breakthrough, and frighteningly plausible. Almost unrecognizable (except for that voice), Michael Caine is shockingly good in a supporting role.

THE QUEEN
Helen Mirren really is that good in the best British film in years not directed by Mike Leigh.

REQUIEM
A superior exorcist film notable for an astonishing lead performance from Sandra Huller, but also in how it lovingly recreates early '70s Germany without a hint of kitsch.

L’ENFANT
A deserving Palme D'or winner at Cannes in 2005, and possibly the Dardenne Brothers' most emotionally involving work to date.

OLD JOY
Even if you don't care much about the characters in the end, you can't deny the poignant simplicity of Kelly Reichardt's film--an austere, introspective counterpart to HALF NELSON.

51 BIRCH STREET
The best family study since CAPTURING THE FRIEDMANS--not as cathartic, but certainly more personal (not to mention ethically sound).

SHUT UP AND SING
A riveting peek into the country music industry and the indestructible yet disarmingly humane Natalie Maines.

THE YACOUBIAN BUILDING
Fascinating Egpytian epic of the sort no one makes anymore. No wonder it's still without US distribution.

NIGHT OF TRUTH
Compelling African film about reconciliation rather than war, although it's shrewd enough to know that sentiments stirred up by the latter never entirely evaporate.

SMALL TOWN GAY BAR
Immensely touching documentary about gay bars in rural Mississippi that I hope everyone gets to see in 2007.

ALSO RECOMMENDED:
(these films received at least 4 stars out of 5)

And finally, a special mention to Jean-Pierre Melville's ARMY OF SHADOWS. I don't care if it wasn't released in the US until this past year--I just can't place a film made in 1969 on my top ten list of 2006. But I have to admit it would give DUCK SEASON serious competition for the number one slot.
Posted by C. Kriofske at 10:51 PM