No Oscar predictions from me this year. Instead, a list of who should be nominated. 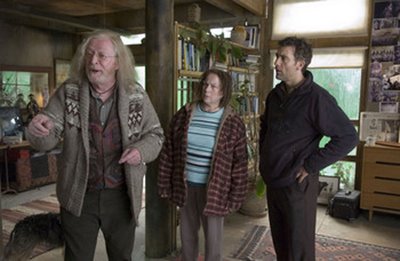 Michael Caine (left) says, "Don't forget about me! Who knew I'd be so bloody brilliant in CHILDREN OF MEN?"

Arkin and Haley are likely to get nominations, but Mackie will get overlooked by his co-stars. Nolte’s performance is all the more impressive because I would’ve never guessed he had it in him. That goes double for Caine, who leaves a stronger mark in his ten minutes on screen here than he did in the entirety of THE CIDER HOUSE RULES.

Hudson will deservedly get nominated and likely win; same goes for Kikuchi, though she’ll probably lose. We’ve all thought, “Wouldn’t it be a gas to see O’Hara get a nod?” for her juicy self-referential part, but I don’t think the Academy is that subversive. If more than 12 people saw Weizenbaum’s film, she’d be in the running.

Not even Gosling is a sure thing here, although if he doesn’t get a nomination it’ll be the year's gravest disappointment come Tuesday morning. As much as I adore Kate Winslet in LITTLE CHILDREN, her co-star should be receiving that kind of attention and praise.

So bountiful was this year’s selection of lead actresses that I would also include Penelope Cruz (VOLVER) and Ellen Page (HARD CANDY) if the Academy would bend the rules and allow seven nominees. Mirren’s already a lock to win and I wish her the best. My other picks don’t stand a chance to be nominated, despite David Lynch’s cow-on-Sunset-Boulevard-stunt for Dern.

If Almodovar can get one of these for TALK TO HER, he could surely do so again. You have to admit this group is far more exciting than Frears, Eastwood, Inarittu, etc; (and no, I haven’t seen THE DEPARTED yet).