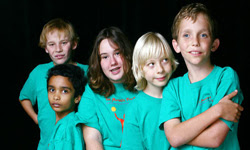 I've seen a number of films that copy the formula set in motion by the spelling bee documentary SPELLBOUND, profiling individual participants and charting their progress as they compete or work towards a unified goal. Produced for HBO but now receiving a theatrical release (and a place on this year's Academy Awards doc shortlist), Tricia Reagan's provocative, exuberant film is one of the very best.
Over a six month period, special needs educator Elaine Hall takes on the challenge of coaching a group of autistic children to write and perform their own amateur theatrical production. Reagan focuses on five particulars kids (including Neal, Hall's adopted son); their personalities and behavioral quirks encompass a wide range that effectively illustrates how autism is highly idiosyncratic and mostly irreducible to a particular set of symptoms. For instance, compare hyperactive, talkative Henry to withdrawn Neal, who cannot speak without the aid of a keyboarded voice box. Somewhere in between is Lexie, an affable fourteen-year-old girl whose astonishing singing voice is poignantly at odds with her mostly reserved, internal nature.
We intimately get to know each child and their parents as they attend classes, workshops and rehearsals. As this happens, the film also dispels myths about the disease. It presents these kids as real, complicated individuals with uncertain futures, not glossing over their flaws and difficulties, but not painting a sentimental portrait of them either. The musical itself is something to behold: although far from seamless, it's incredibly moving just to see what each child has accomplished. AUTISM: THE MUSICAL also isn't entirely seamless, as the editing could be tighter in spots. However, it is inspirational without being maudlin, and remarkable in how naturally it moves us respect these kids as we would any other—perhaps the thing their parents desire most for them.
Posted by C. Kriofske at 6:47 PM