It's December--time for another Chlotrudis poll. Here is my list of favorite funny films; the poll results will be published later in the month. 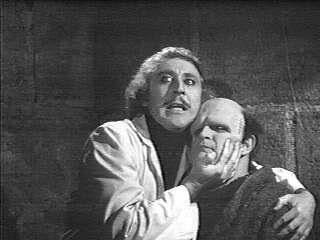 1. YOUNG FRANKENSTEIN (dir: Mel Brooks, 1974)
As if anything else could be on top. A gifted cast (from Gene Wilder's virtuoso, operatic comic performance to Madeline Kahn's divine, sordid brilliance) and a hilarious, stoopid-cerebral screenplay (from "walk this way... no, this way" to "He... vas... my... BOYFRIEND!") come together in a service of an irreverent but strangely sympathetic genre tribute.

2. BRINGING UP BABY (Howard Hawks, 1938)
Anyone crafting a romantic comedy today should study this smart, breezy one and take note of Cary Grant's and Katharine Hepburn's giddy, contagious chemistry, which arguably no pair has topped since.

3. MONTY PYTHON AND THE HOLY GRAIL (Terry Gilliam and Terry Jones, 1974)
I loved it for the laffs as a teenager. Now, I just can't get over how conceptually weird and unique it is--a crowd pleasing, sublimely silly avant garde comedy.

4. A CHRISTMAS STORY (Bob Clark, 1983)
This pitch-perfect adaptation of various essays from master humorist Jean Shepherd endures because of how easily recognizable he made his childhood without diluting its sting.

5. SLEEPER (Woody Allen, 1973)
Not his best film (that's coming up), but certainly the one with the most laughs-per-minute (or second?). Only Allen could get away with a throwaway line about getting beaten up by Quakers or something as wonderfully insane as the climatic cloning (croning?) sequence.

6. THIS IS SPINAL TAP (Rob Reiner, 1984)
Although ALL YOU NEED IS CASH preceded it, this is the grandaddy of most mockumentaries. It works because it gets inside its targets' skins all too well, and you'll never see more finely tuned deadpan delivery elsewhere.

7. AIRPLANE! (Zucker/Abrahams/Zucker, 1980)
Okay, this certainly beats SLEEPER on laughs-per-second: no other film even comes close. This throws every gag it can possibly think of up on the screen, and it's remarkable how many of 'em stick.

8. NINE TO FIVE (Colin Higgins, 1980)
A deliciously dark feminist office comedy, it briefly revived screwball in the irony deficient '80s, showed that Dolly Parton could hold her own as a comedienne with Lily Tomlin, and makes the top ten chiefly for its gleefully wicked fantasy sequences.

9. ANNIE HALL (Allen, 1977)
A perfect confluence of wacky comedy and bittersweet drama, Allen's best film is a reminder of how well he and Keaton worked together, wrapped up in a collage of how funny life and all of its neuroses can be.

11. WHAT ABOUT BOB (Frank Oz, 1991)
Vastly underrated psych-comedy that reminds one how funny Bill Murray could be--and how Richard Dreyfuss is at his best when chewing up the scenery with complete abandon.

12. WAITING FOR GUFFMAN (Christopher Guest, 1996)
Guest and his overqualified ensemble deconstruct middle American small towns and community theatre, but not without making us genuinely feel for them (if only a little).

13. HAIRSPRAY (John Waters, 1988)
Leave it to the risque Waters to nearly achieve household name status with this PG-rated satire, which features a star turn from a pre-tabloid talk show Ricki Lake, an odd, odd cast (Debbie Harry and Jerry Stiller!), and a sweet, if slightly warped sensibility.

14. THE ROYAL TENENBAUMS (Wes Anderson, 2001)
Perhaps more moving a "comedy" than any other film on this list, the comic stuff tempers but never obscures the tragic stuff in Anderson's endearingly quirky family portrait.

16. THE KING OF KONG: A FISTFUL OF QUARTERS (Seth Gordon, 2007)
Probing a curious subculture for both laughs and tears, this incisive but fair documentary about competitive video game players finds hilarity without having to coax too much from its participants (particularly the "Donkey Kong kill screen" guy.)

17. SOUTH PARK: BIGGER, LONGER AND UNCUT (Trey Parker, 1999)
Let's just say its one of the more successful TV to film adaptations, capturing every one of the show's good qualities and transporting them into an ambitious, go-for-broke, extraordinarily profane musical.

18. THE TRIPLETS OF BELLEVILLE (Sylvain Chomet, 2003)
This very French animated feature is heavily indebted to silent silver screen clowns from Chaplin and Keaton to Tati, yet it's one-of-a-kind: rarely has humor derived from the surreal or the grotesque seemed so charming.

19. THE SADDEST MUSIC IN THE WORLD (Guy Maddin, 2003)
Speaking of the surreal, this one features a tiara'd Isabella Rosselini and clear glass prosthetic legs filled with beer.

20. HAROLD AND MAUDE (Hal Ashby, 1971)
"Has all the fun and gaiety of a burning orphanage" went one of the original reviews and while not always a laugh riot, the film's shaggy, disarming (and at times exceedingly black) humor never fails to make me smile.

21. OFFICE SPACE (Mike Judge, 1999)
Taping into the slacker-cum-office drone zeitgeist, this already cult classic would be only a wish fulfillment fantasy if it didn't hit so close to home for so many. Bonus points for flair!

22. TOOTSIE (Sydney Pollack, 1982)
An insightful comedy that transcends its concept, since it evokes a world of issues and ideas that encompasses more than the words, "Dustin Hoffman does drag".

23. DUCK SOUP (Leo McCarey, 1933)
For an act that came from the vaudeville tradition, The Marx Brothers must have seemed incredibly subversive in their cinematic heyday, and they still do today.

24. SOME LIKE IT HOT (Billy Wilder, 1959)
An undisputed classic, it's surely the best thing Tony Curtis, Jack Lemmon and Marilyn Monroe ever did. Everyone praises the simple, graceful closing line of dialogue, as well they should.

25. WET HOT AMERICAN SUMMER (David Wain, 2001)
Possibly the silliest film on this list, but the ensemble cast rivals that of Guest's, and its satire of early '80s summer camp sex comedies is dead-on, even when it's fairly ridiculous.

And some others I considered:

ALL OF ME
BEING JOHN MALKOVICH
BEST IN SHOW
DELICATESSEN
DONKEY SKIN
DR. STRANGELOVE (OR, HOW I LEARNED TO STOP WORRYING AND LOVE THE BOMB)
ED WOOD
THE HAPPINESS OF THE KATIKURIS
ME AND YOU AND EVERYONE WE KNOW
PLAYTIME
SMILE
SONGS FROM THE SECOND FLOOR
WHAT TIME IS IT THERE
WHAT'S UP DOC
Posted by C. Kriofske at 11:26 PM