I figure I spent half my time listening to music on the ever seductive shuffle, and the other half attempting to take in full albums like we did when we was kids. Here's my faves regarding the latter: 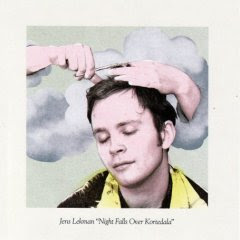 1. Jens Lekman - NIGHT FALLS OVER KORTEDALA
His droopy baritone and lovably dorky demeanor always positioned this young Swede as the prospective heir apparent to Jonathan Richman, Morrissey and Stephin Merritt; the crucial advance he makes on his third album confirms it. At first, you notice the sometimes florid, often breathtaking arrangements (everything from lugubrious Scott Walker orchestration to crisp, sample-laden funk-folk). However, it's his words, subject matter and wholly original persona that set him apart. Who else would write about posing as a lesbian friend's paramour to her conservative father or accidentally cutting off your finger when your girlfriend sneaks up from behind for a hug? Who else would sing, "Most shy people I know are extremely boring / Either that or they are miserable from all the shit they're storing."? Could anyone else get away with it? 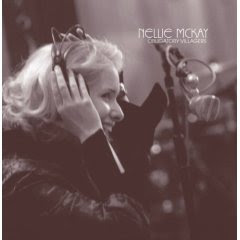 2. Nellie McKay - OBLIGATORY VILLAGERS
She hasn't made it easy for herself. By sticking to her guns, she's lost her major label and, to judge by this mostly ignored self-released record, much of her potential audience. Unwillingness to compromise usually results in either great art or self-indulgence, and her third album nearly overflows with both. Pared-down (for the first time, a single instead of a double!) but densely packed, it initially frustrates with its in-jokes, anachronisms and overly quirky guest stars (such as Bob Dorough of SCHOOLHOUSE ROCK! fame). Given time, though, it's not only a grower, but reveals itself as a stunning, truly subversive political song cycle. That's what ultimately makes it all cohere: the crazy musical numbers from hell ("Galleon", "Zombie"), the rock opera from heaven ("Testify"), and other intriguing, unclassifiable delights. 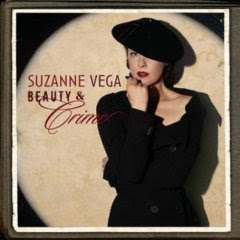 3. Suzanne Vega - BEAUTY AND CRIME
I nearly gave up on her after her last effort, 2001's dull, ironically colorless SONGS IN RED AND GRAY. Where was the inventive, quirky Vega of her much-derided (although I thought they were fabulous) Mitchell Froom-produced '90s albums? Well, she's back, along with the clear-eyed, folk-rock Vega of the '80s, in this utterly concise, solid effort. On these eleven introspective songs about New York City, Vega connects with us in a way she arguably hasn’t before, at least not in full. The entire set carries an older-and-wiser vibe, but she sounds fresh and deeply affecting, whether she's singing about a failed celebrity romance ("Frank and Ava"), a graffiti artist ("Zephyr and I"), her deceased brother ("Ludlow Street") or even 9/11 (“Anniversary”). 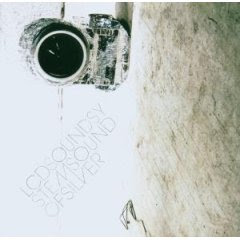 4. LCD Soundsystem - SOUND OF SILVER
The reason why James Murphy's second album has meant so much to so many could be that he cut out a lot of the first album’s clever snark, but left in its infectiously giddy sense of fun. It also helps that he ramped up the emotional content just a few notches without seeming too obvious about it. On "Someone Great" and "All My Friends" (perhaps the best New Order homage Murphy or anyone else will ever conceive), he gives the impression he's honestly singing about himself, and even if he isn't, it doesn't matter. Meanwhile, the title track and "Get Innocuous!" (the year’s best album opener) are dance grooves with actual tunes attached, and their sneakily building momentum is exhilarating. 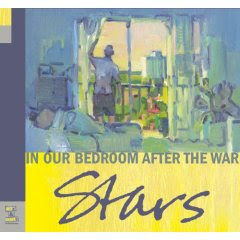 5. Stars - IN OUR BEDROOM AFTER THE WAR
I thought I had found the Album of the Year when I first heard this Canadian outfit's fourth full-length; overlong by two or three tracks and with a somewhat patchy second half, it's not. Still, for at least six or seven songs, it courts perfection, melding anthemic alternative pop with theatrical but genuine passion. "Take Me to the Riot" and "The Night Starts Here" are playful U2/Smiths tributes without the self-serious/self-loathing pomp, "My Favourite Book" is an eloquently sweet, soulful but never sentimental love song, "Personal" is a wonderfully downbeat lament about disconnection and "The Ghost of Genova Heights" fluently soars like vocalist Torquil Campbell's unexpected but engaging shift into an elegant falsetto. 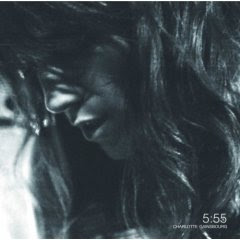 6. Charlotte Gainsbourg - 5:55
Like her titanic father, she doesn't possess a "good" voice, but she sure knows how to make use of it. Like Sarah Cracknell, she's an aural presence, another instrument that adds texture to a carefully orchestrated whole. As with her acting, her singing is never flashy, but always serviceable and memorable. She's lucky that the lush, subtly tart music here suits her well, whether she's bringing empathy to a Jarvis Cocker song ("The Songs That We Sing") or cosmetic surgery ("The Operation"). On the brilliantly ornate "Everything I Cannot See", you could say her performance is award-worthy, as she successfully enables us to empathize with her. 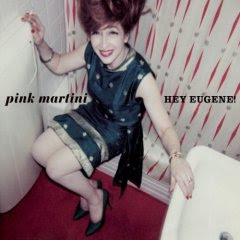 7. Pink Martini - HEY EUGENE!
Labeling this collective a "lounge orchestra" is like calling PJ Harvey a singer/songwriter. In both cases, it's accurate but it only skims the surface of what each artist does. On this breakthrough album (it actually charted in the top 40), Pink Martini continually shift gears from bubbly exotica to wrenching torch songs to gleefully wicked tangos to stuff beyond simple description (and that's not even mentioning a version of "Tea For Two" with freaky living legend Jimmy Scott). Enchanting vocalist China Forbes may be the glue that holds it all together—it’s hard to imagine how seductive the funky, Al Green-ish title track would be without her—but just as often the group breaks no sweat in transcending its influences. 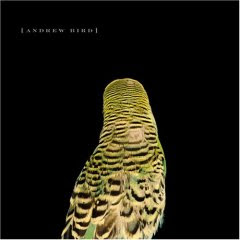 8. Andrew Bird - ARMCHAIR APOCRYPHA
Bird's music straddles the line between gorgeously complex and infuriatingly incomprehensible so often that his latest almost didn't make my top ten. It's not radically different from his last (and best) album, which also made my list two years ago. Fortunately, it's just different enough to keep you guessing and on your toes. This is probably the closest he's ever come to making a "rock" album as it's front-loaded with his most accessible melodies. Then, it veers away towards strange but fascinating little puzzles with titles like "Static X" and "Spare-Ohs" and my favorite, "Scythian Empires", a weird little folk number with a catchy-as-can-be piano hook and a scathing, socio-political critique hidden underneath. 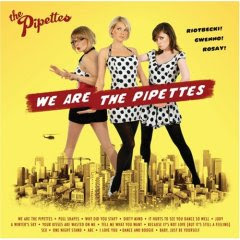 9. The Pipettes - WE ARE THE PIPETTES
Mix in classic girl groups like Martha and the Vandellas with neo-classic ones like Bananarama, add a smidgen of Cindy and Kate from The B-52's, and you have this British trio. Refreshingly unironic but just cheeky enough to make you think they're in on the joke, they won me over with "ABC", where they claim a guy is book smart but "he don't know about ecstasy" and for a second you think they might actually mean the band XTC. Clever wordplay also flourishes in songs like "Pull Shapes" and "Because It's Not Love (But It's Still a Feeling)"; the music's even better, both retro and newfangled and always thrilling. 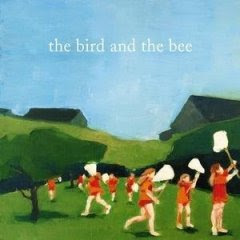 10. The Bird & The Bee – THE BIRD & THE BEE
As usual, I thought of many contenders for this final slot, all of 'em listed below (with a few others that I admired but never dreamed of including here). I finally gravitated towards this beautiful, delicately acerbic slice of sophisticated pop. With both Ivy and Saint Etienne on hiatus, this duo of Inara George and Greg Kurstin provides a more-than-adequate substitute. Flawless, Brill Building pastiches like “Again and Again” and “La La La” bump heads with an ingénue’s playful but prickly diatribe against being photographed (“I Hate Camera”) and a cheerfully sardonic chorus that goes, “Would you ever be my / would you be my fucking boyfriend?”
TEN OTHER RECOMMENDATIONS:
Junior Senior - HEY HEY MY MY YO YO
Came this close to cracking the top ten. Let's the hope the upcoming B-52's reunion is half as glorious as Cindy and Kate's guest vocals on "Take My Time".

The New Pornographers – CHALLENGERS
This doesn’t reach out and grab you like TWIN CINEMA did, but it's strong enough that you nearly think AC Newman couldn’t make a truly mediocre album if he tried.

Feist - THE REMINDER
Lots of great stuff, iPod ad campaign, clever video and all, but LET IT DIE flows better from beginning to end.
Crowded House - TIME ON EARTH
Pretty darn good for a reunion album. If only they could've shaved three or four tracks off the end.
PJ Harvey - WHITE CHALK
I want so much to love this without reservation, but it's challenging and dark in a way even she hasn't been before. But I'm not done trying to decipher it.
Bebel Gilberto - MOMENTO
Another solid album that refines her wondrous shtick but doesn't add anything new to it.
Tracey Thorn - OUT OF THE WOODS
At times she sounds like she's still in the woods, but her appraisal of such ("Raise the Roof") is touching, and it's just great to have her back, especially on the sublime, groovy gender-bender "Get Around to It".
The Shins - WINCING THE NIGHT AWAY
They've lost that hard-to-put-a-finger-on essence that CHUTES TOO NARROW had in spades, but the best songs ("Australia" and "Phantom Limb") bottle it up and let it explode.

The Weakerthans – REUNION TOUR
Still loving/hating Winnipeg, which could give them material for ages if not different ways of expressing themselves.

Erin McKeown – SING YOU SINNERS
Her out-of-time voice was made for standards, and while these fun interpretations couldn’t possibly surpass the originals, they’re far from redundant.
Posted by C. Kriofske at 10:23 PM