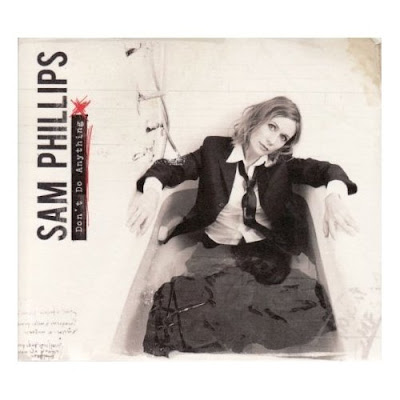 1. Sam Phillips – DON’T DO ANYTHING

Twenty years after the former Leslie Phillips quit being a contemporary Christian artist and adopted her childhood nickname, she’s still making unconventional, vital music. Several tracks on her seventh album firmly carry over the acoustic/cabaret vibe of her previous two releases (like the infectious, celebratory “Sister Rosetta Goes Before Us”); others feature some of her sharpest hooks in well over a decade – for instance, “Little Plastic Life” crosses the jazzy, supple swing of A BOOT AND A SHOE with the Beatles-fixated choruses of MARTINIS AND BIKINIS. But a good chunk of DON’T DO ANYTHING delves into new terrain: “No Explanations” startlingly kicks things off with just Sam’s voice and a distorted electric guitar before a loud, primal stomp comes in, giving the song an uncommon thrust. The title track, “My Career in Chemistry”, and “Shake It Down” also employ these elements to great effect, with the latter concluding in a delicate fury of clanging (yet not entirely cacophonous) percussion. Although this is Sam’s first effort without her producer (and now ex-husband) T-Bone Burnett, it feels not entirely correct to simply dub it her “divorce album” or to say she’s newly independent. Always an iconoclast, she’s forever pushing forward. She delayed this album’s release by a few months to work a little more on it, but instead of feeling smothered or hermetic, the twelve concise miniatures contained here exude spontaneity, a cutting wit, and a radiance that pierces through all the anger and sorrow.

Favorite songs: “No Explanations”, “Little Plastic Life”, “My Career in Chemistry”, “Flowers Up”, “Sister Rosetta Goes Before Us”, “Watching Out of This World”
Posted by C. Kriofske at 12:01 AM