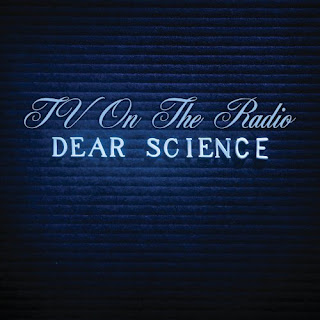 I overrated this band's last album - in an especially weak year for new music, it earned bonus points for originality. However, it's also a rather uneasy, challenging listen. Although I wouldn't hesitate to recommend it to someone who likes challenging music, I rarely feel the need to dial it up on the 'Pod these days. Thus, I approached this follow-up with some skepticism, weary of buying into the hype yet again. Fortunately, all my concerns dissipated within hearing the opener "Halfway Home" for the first time. The song itself is not a radical departure for the band, but everything about it - the handclaps, vocalist Tunde Adebimpe's euphoric "ba ba ba's", the extra guitars that crash in near the end - is so damn irresistible and inviting. Subsequent songs have that sense of immediacy even as they each sound like the work of a different band - one eclectic enough to make room for both "Dancing Choose", a half-rapped political song (with a bloodline you can trace back to "It's the End of the World as We Know It (and I Feel Fine)" and "Subterranean Homesick Blues") and something as sublimely beautiful and moving as the hazy, soaring "Family Tree". In short, they're now using their powers for good instead of evil, and it opens up the music's possibilities while also strengthening its impact.