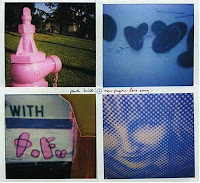 30. Stew – GUEST HOST
As quirky a debut one would expect from an African-American who led a band called The Negro Problem. Meant to showcase his acoustic songwriter side, it’s full of lovely pop songs, none lovelier than a critique of perpetual drug rehabilitation followed by an ode to consensual marital sodomy.

29. Rufus Wainwright – WANT ONE
Layered with references to Bolero and bad sitcoms, Wainwright's compositions are larger-than-life as usual, but this time out, he reveals a wise, wounded soul who keeps his excesses under control by letting the music and songwriting (more so than the voice) take center stage.

28. Black Box Recorder – THE FACTS OF LIFE
Only Sarah Nixey could sound so creepy, so knowing and yet so… wholesome on this album’s sexual-advice-for-budding-teens title track. Like the rest of the record, it’s a perfect distillation of BBR’s peculiar fusion of pristine easy listening sparkle and pitch black humor.

27. PJ Harvey – STORIES FROM THE CITY, STORIES FROM THE SEA
Some pooh-poohed Harvey for this shiny, happy ode to falling in love in New York City; as much as I’m entranced by spooky, angry PJ, she’s never been more appealing this way. From the blissful jangle of “A Place Called Home” to the primal stomp of “This is Love”, she’s never gathered together such a solid assortment of songs, either.

26. Sam Phillips – FAN DANCE
Initially, I was not sure what to make of this, her first record in five years. Often, the minimal songs seemed barely there, threatening to evaporate. But though Phillips left her signature retro-pop sound behind here, she also opened up a new world of hidden gestures and small pleasures—nine years later, it continues to grow on me.

25. Paul Brill – NEW PAGAN LOVE SONG
Brill began his solo career as another alt-country crooner, but gradually revealed the eclectic pop craftsman waiting in the wings. With this record, he began dabbling in electronics, but carefully folded them into his well-crafted songs with a suppleness that provided enrichment instead of mere decoration.

24. Charlotte Gainsbourg – 5:55
Coming in and out of focus like a hazy dream, Gainsbourg’s musical debut (as an adult, anyway) is a lovely thing to listen to in the middle of the night (or, as the title suggests, the break of dawn). She may not have a “good” voice (nor did her father), but she sure as hell knows how to use it, always adding texture and presence to a lush, if enigmatic whole.

23. Goldfrapp – SEVENTH TREE
Never content to make the same album twice, Alison Goldfrapp especially threw fans for a loop when she followed the glam-tastic SUPERNATURE with something completely different: an almost pastoral collection of chilled-out, slightly sinister psychedelic folk music. Fortunately, it turned out to be an even better fit.

22. Jens Lekman – NIGHT FALLS OVER KORTEDALA
This lovably mopey Swede established himself as the heir apparent to Morrissey and Stephin Merritt by writing songs about posing as a lesbian friend’s paramour and how he accidentally cut his finger off after his girlfriend snuck up behind him for a hug. He also went one better by constructing a handmade, comprehensive sonic palette that his forebears would have never come up with by themselves.

21. TV On the Radio – DEAR SCIENCE
Having created an uneasy, challenging, seemingly new sound out of many disparate parts, this much-hyped Brooklyn band turned heads when, on this release, they started using their powers for good instead of evil. Every track here may at first sound like the work of a different band, but by favoring beauty over dissonance, they strengthen their impact and confirm that smart music can be fun, too.
Posted by C. Kriofske at 12:01 AM