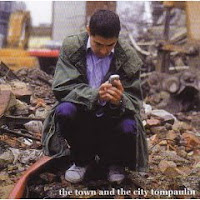 40. The Weakerthans – RECONSTRUCTION SITE
“I hate Winnipeg” is the standout phrase here, although you get the sense that John K. Samson and his bandmates have a more complicated love-hate relationship with the frozen Manitoba city they call home, for the real key lyric is, “I know you might roll your eyes at this / but I’m so glad that you exist.”

39. Junior Senior – D-D-DON’T DON’T STOP THE BEAT
A now-defunct Danish duo of a fat gay man and a skinny straight one, singing/rapping/shouting out B-52’s inspired nonsense about dancing, partying, shaking and aspiring to be white trash, quoting Kool and the Gang one track and Billy Idol the next—of course they were just too weird and wacky (and too good) to last.

38. A. C. Newman – THE SLOW WONDER
His power-pop supergroup The New Pornographers put out four good-to-great albums this decade, but none of them cohere as well as this first solo effort, which sounds cozier and more economical while containing just as many hooks; much of it also wouldn’t be out of place on the soundtrack to a vintage Scooby Doo cartoon.

37. Mekons – OOOH! (OUT OF OUR HEADS)
This long-running/long-suffering British collective celebrated their 25th anniversary when they released this, their most vital recording in well over a decade. A 9/11 response record only in a cryptic sense, it aims to understand violence and fundamentalism with a heady but affecting mixture of fury, warmth and blasphemy.

36. Tompaulin – THE TOWN AND THE CITY
Hearing this obscure, mostly forgotten British indie band’s charming debut now hints at a grand wasted opportunity—between all of its wistful, witty character studies and vocalist Stacy McKenna’s gorgeous, siren-like call, it’s enough to hang your head and sigh that they should have been at least as big as Belle and Sebastian.

35. Metric - FANTASIES
Smoothing out all the rough edges has proven disastrous for many an indie band, but for Emily Haines and her cohorts, it suits them brilliantly, perhaps because Haines is as adept coming up with a catchy chorus as she is adding depth and nuance to her sleek, gleaming electro-rock.

34. Super Furry Animals – PHANTOM POWER
Revisiting all of this Welsh collective’s vast catalogue last summer, I was struck by how well this particular record has held up. It’s eclectic as ever, veering from the scathing indictment of “Liberty Belle” to the shimmering psychedelia of “The Piccolo Snare”, but these guys have a special knack for making everything sound like it belongs—which they will show to an even finer degree on a later record further up this list.

33. Sufjan Stevens – ILLINOIS
What I’ve always admired most about Sufjan is that he’s a little nuts—it takes longer to read some of his song titles than to actually listen to them! Good thing, then, that he’s also something of a genius. ILLINOIS exemplifies Steven’s original blend of folk, Charlie Brown music and symphonic experimentation as it meshes story songs and personal essays into a gestalt that no one else has replicated

32. Kings of Convenience – QUIET IS THE NEW LOUD
What initially struck me about this Norwegian duo was how adorably geeky they looked on the cover. Actually hearing them confirms that it’s no act or pose—they’re genuine through and through and what lends their dynamic acoustic balladry its power is that you believe every word they sing.

31. Belle and Sebastian – THE LIFE PURSUIT
By the time this record came out, Stuart Murdoch had little left to prove. So, with ample help from his band, he showed just how far he could go, switching from bubble-gum glam and blue-eyed soul to squishy funk and good ‘ol chamber pop, with incredible dexterity and a frightening consistency that one would never dare call twee.
Posted by C. Kriofske at 12:01 AM