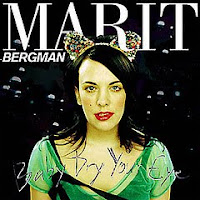 Here we go--my top fifty albums of the last decade (aughties, naughties, whatever you want to call it), counted down in multiples of ten. With music, I've noticed I need time to live with a recording to develop a strong assesment of it, which is why the proportion of post-2005 records is small (and keep in mind 2006 and 2007 were compartively naff years for new music). When I look back at this list in a few years, I'm sure almost everything will be changed around, but for now...

50. Florence + the Machine – LUNGS
I initially hesitated to include this here because I’ve had less than two months to absorb it, but this passionate, glittering set is the first debut album I’ve instantly adored in a long time, so it kicks off this list (and may place much higher on it in years to come).

48. Nellie McKay – OBLIGATORY VILLAGERS
A subversive, slightly scattered yet succinct political song cycle that came out at exactly the right time (Fall 2007) and flopped commercially. Even with a dramatically changed political climate, it remains ripe for rediscovery.

47. Roisin Murphy – OVERPOWERED
The straightest pop music this ex-Moloko vocalist has ever recorded is still delightfully, wickedly bent, from lyrics like, “I wanna get you out of your cave, man” to this album cover, which certainly influenced Lady Gaga.

46. St. Vincent – ACTOR
Speaking of bent female singer-songwriters, it was immediately apparent on her first album that Annie Clark had talent to spare, but on this follow-up, she shows a more keen sense of how to utilize it, cloaking her David Lynch-ian quirks with Disney-friendly melodies (if just barely).

45. Marit Bergman – BABY DRY YOUR EYE
Chances are you would've heard of this Swedish songstress by now if she had ever signed an American record deal. Her winning underdog persona had been in place from the start, but her second album provided the best showcase for it, practically overflowing with equally winning, disarming songs.

44. Sleater-Kinney – ONE BEAT
This has all of the raucous energy and musical dexterity of ALL HANDS ON THE BAD ONE (which I almost included in its place), but it gets the edge for adding new dimensions to their sound that easily snap into place, like the punk/Motown hybrid of “Step Aside” or the bluesy, Stones-inspired closer, “Sympathy”.

43. Death Cab for Cutie – TRANSATLANTICISM
Between his band’s consistent discography and his influential, one-off side project The Postal Service, Ben Gibbard has constructed a remarkable resume, and this record is its crown jewel. A song cycle about such universal themes as loneliness and distance, it nonetheless scans like a one-on-one conversation even as it employs a gigantic choir on the stirring title track.

42. Ted Leo and the Pharmacists – HEARTS OF OAK
Passion is a reoccurring theme on this list, and Leo has enough of it to hold his own in a duet with Florence Welch (see #50), even though his music sounds nothing like hers. His energy is just as infectious, though—both when he laments the long lost second wave of ska (“Where Have All the Rude Boys Gone?”) and shrugs off the hopelessness and complacency of his fellow left-wingers.
41. Gillian Welch – TIME (THE REVELATOR)
Her most minimal and pure statement, it studies the past in order to understand the present, and really says something about time and loss, not to mention celebrity, ethics, desire and other concerns, all with a total lack of pretense.
Posted by C. Kriofske at 12:01 AM