I had exceptional difficulty picking a number one album this year, as I loved the top four almost equally. However, I can't have a four-way-tie on a top ten list, so after much deliberation... 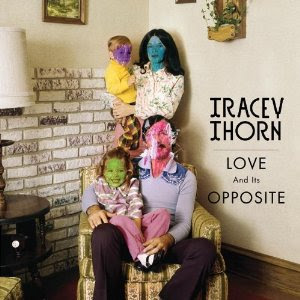 1. Tracey Thorn - LOVE AND ITS OPPOSITE

Thorn recently married Ben Watt, her longtime partner in Everything But The Girl with whom she has three children, so it initially seems a little odd that her third solo effort contains songs about heartbreak, divorce and working up the courage to attend a “Singles Bar”. But EBTG’s best work always offered an unusually sobering, brutally honest perspective on romantic love and you believed every word regardless of whether or not Thorn and Watt lived it. Largely eschewing the dance music that defined 2007’s Out of the Woods and the later EBTG albums, this is mostly stripped-down chamber pop full of unexpected but earned epiphanies: the opening piano waltz “Oh, the Divorces!” blossoming into orchestral bliss on its bridge, the peppy, charming mother-to-daughter heart-to-heart of “Hormones”, the woozy cover of Lee Hazelwood’s “Come On Home to Me” (sung as a duet with Jens Lekman) that’s so perfect one would think Hazelwood composed it specifically for them, the ineffable sense of wintry dread piercing through the autumnal reflection of “Late in the Afternoon”. More than anything, Love and Its Opposite recalls and is often of a piece with EBTG's masterpiece, 1994’s Amplified Heart.

Favorite Tracks: Hormones, Oh, The Divorces!, Why Does the Wind? Come On Home to Me, Kentish Town
Posted by C. Kriofske at 12:00 AM