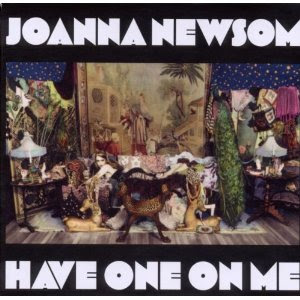 Yes, it’s an honest-to-god triple album: three discs, six songs/40 minutes per. Well, if her ambitious, impenetrable second album Ys suggested she had more to her than a squeaky seven-year-old girl’s voice in a woman’s frame, this gargantuan follow-up confirms it, but with a few twists. For one thing, although most songs still average six-eight minutes in length, they’re far easier to swallow with their simple chord progressions and even an occasional chorus. More significantly, her vocals sound deeper, less harsh and far more nuanced. Although I glean more pleasure from a single disc at a time than trying to consume the entire thing whole, this is an apotheosis for Newsom: abundantly rich, stimulating and far reaching even if it exists in its own inimitable plane.