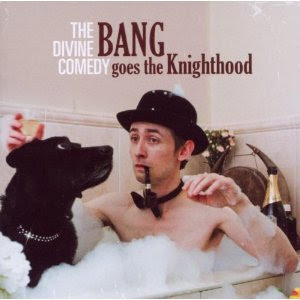 I’ve spent the past year delving into Neil Hannon’s considerable back catalogue (Absent Friends or best-of A Secret History are good places to start); satisfyingly, this conveys no reduction of his erudite wit, clever hooks or particularly British insouciance. In fact, apart from a suitably dramatic ballad or two, it’s positively lighthearted: “Neapolitan Girl” and “Island Life” sway and sigh like an effervescent breeze, while “At the Indie Disco” celebrates rather than mocks its Morrissey devotees. Hannon even allows you to almost root for “The Complete Banker”, who laments apologetically but with sincerity, “So I caused a second great depression, what can I say? / I guess I got a bit carried away."

Favorite Tracks: At the Indie Disco, The Complete Banker, I Like
Posted by C. Kriofske at 12:00 AM

I've loved the Divine Comedy for years, and they are usually overlooked. I missed this new album though, so I'll make a point of downloading it soon!