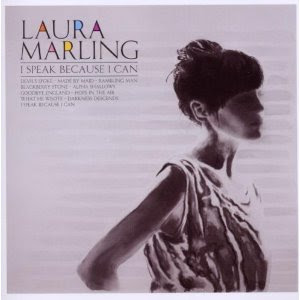 4. Laura Marling - I SPEAK BECAUSE I CAN

As a 20-year-old Brit singing potent, exceedingly dark folk music, Marling would seem a novelty if both her vocals and words did not bespeak such rare maturity and wisdom for any age. She expertly builds from a hushed stillness to menacing rage on “Hope in the Air”, but also steeps the musically jaunty “Darkness Descends” with just enough self-deprecation to temper her misery. A major advance on her recorded-at-the-age-of-17 debut Alas, I Cannot Swim, this ten-song set reminds me of nothing less seminal than The Songs of Leonard Cohen—one can intuit a sustained sense of awe in its austerity, especially on those occasions when the simple arrangements swell into something magisterial. As Robert Altman did with Cohen on McCabe & Ms. Miller, some likeminded young director should score a film to these songs.